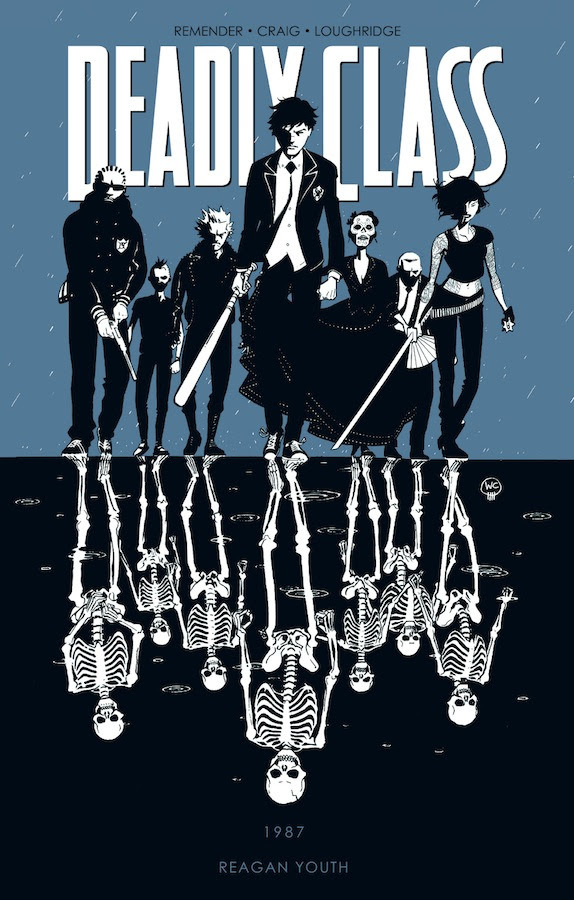 This book came highly recommended to me by the two of the best comic book gurus out there- Kevin and Charles from Graham Crackers in DeKalb. They don’t steer me wrong when I ask for purchasing selections for my library, so I was anxious to read it. I did not love it at first. Confused I went  to the store yesterday to talk to them about it before I finished my review. I had the best conversation with them and wish I could have taped it, for they shared such passion and deep insight about the book, that I was then able to see it through another lens and it upped my opinion of the story.

Set in San Francisco in 1987, Marcus is a Nicaraguan immigrant whose parents died soon after coming to America in a freak accident with a mentally ill woman who was committing suicide. Sent to a group home for several years, Marcus, who is now a teen, escaped and was living on the streets.  One night he is recruited by a daring young woman named Saya to join Kings Dominion Atelier of the Deadly Arts, a high school for assassins. Attended by children of the world’s top crime families, the cliques in the school are literally killer. Marcus gets involved with a motley group and must follow the professor’s assignments of killing a vagrant who has committed a sin and “deserves” to die. He and his partner Willie bond, and a true friendship is formed under dire circumstances. Later these two, plus Saya and a few others, set out on a road trip and are a followed by deranged man from Marcus’s past. The group’s confrontation with this villain sets up story lines for the future.

More than the actual story, it is the themes of this series that set it apart. Marcus is a symbol of the disenfranchised and is morally ambiguous. He is no hero, but brings to light the discontent that some youth feel when faced with a threatening future. Damaged by society, these youth on the margins feel they have no recourse except through violence. As Charles and Kevin opined, some big changes in our world have only come to fruition through violence. Martin Luther King Jr was able to further the Civil Rights Movement through love and non-violent means, but he was counterbalanced (and helped) by Malcolm X’s methods, as Gandhi was also helped by radicals. Their musings were thought provoking and made me look at this comic in a new way. This story takes those thoughts to an extreme, but as a tagline on the back cover says “Change the world with a bullet”. See my review for Genius: Siege that also worked with the idea of using violence for change.

The artwork is stellar with a coloring palette that sets the tone for the narrative. The era of the 1980’s is accurately represented through the art, with an authentic and gritty vibe. The panels are varied, with some bold choices, and visuals that stand out. Another strength is the introduction by David Lapham and afterward written by the author, both which delve further into the fascinating background of how this comic got started.

Initially, I struggled connecting to the story. I had a rather straight-laced upbringing and didn’t easily connect to the youth of this school. However, by the ending everything came into focus. No matter what, teens (and adults) are looking for connections with others, and that is a universal need.

Aside: If you live in the northern Illinois region, you must go to Graham Crackers in DeKalb for your comic and graphic novel selections. Located on the NIU campus, this store has superb customer service and the best employees. It would save me time at work if I ordered our graphic novels online, but I refuse, I must go in and browse.  Kevin and Charles guide me on my purchasing selections, and they happily expound on books that they feel would be worthy of purchase and warn me against books that are weak (I wish I had listened about Civil War II!) or aren’t being continued.