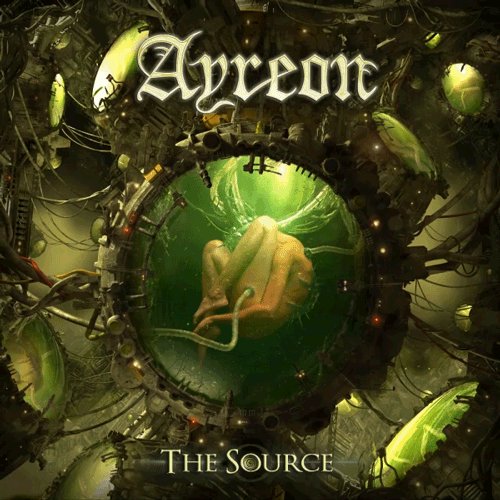 And now for something completely different: a review of a music CD!

The Source is the latest progressive metal album by Ayreon, aka Arjen Anthony Lucassen, a project of his in which he writes metal operas. He writes and plays most of the music for his albums, but invites vocalists from different (mostly metal) bands to sing the parts. Many of his albums follow a science fictional story. This album, The Source, reveals the origins of The Forever, the alien race that is at the center of the story.

Alpha, the planet The Forever originally inhabited, is dying. It’s being shut down by the Frame, the computer system that controls the entire planet. It thinks that in order to solve the ecological and political problems of the planet, it has to wipe out the entire race. Ten of the Forever manage to escape in a spaceship called the Starblade. They head for an ocean planet near the Star of Sirrah. In order to adapt to their new aquatic environment, they take a drug they call “the Source” or “Liquid Eternity” to change their bodies and minds. They alternately mourn for their fallen race, worry that they will forget their origins and repeat their past mistakes, and rejoice in their new world, the new start they have for their future. But… deep in the depths of the ocean, there is one robot who stayed faithful to their masters thus far… whom the Forever have forgotten.

The cast of vocalists is incredible: Tommy Karevick of Kamelot, Russell Allen of Symphony X, Simone Simons of Epica, Hansi Kursch of Blind Guardian (both of these bands my boyfriend and I have seen in concert), Floor Jansen of Nightwish, and many more. They all sing together at multiple points in the album, and have lots of duets together, making it feel more like an opera than previous Ayreon albums. All the vocalists do an amazing job of conveying the emotions of their characters. Each song flows seamlessly from one track to the next, so that the music and the story are uninterrupted. There is a serious lack of continuity listening to the playlist of the album on YouTube vs. listening to the album on iTunes. Even the few seconds it takes for the next video to load is too long, too jarring.

There are parts that are epic, parts that are pure headbanging metal, parts that are tragic, parts that are funky with an amazing bass, parts that are creepy. It adds up to a sweeping, awe-inspiring whole. For previous fans of Ayreon, there are multiple references to past albums, both in the lyrics and within the music. For new fans, I am so sorry you have to listen to this one first, because no other Ayreon album will come close to this for you. I was completely blown away by it and it’s been on repeat since it dropped. This has permanently replaced my favorite album, 01011001… and my favorites are incredibly hard to replace!

Thank you for being patient with this late Wednesday post… and listening to me rant about metal, no less!