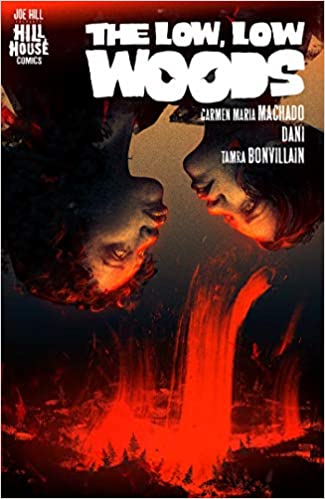 The Low, Low Woods is an atmospheric and surreal horror story set in the dying coal town of Shudder-To-Think, Pennsylvania.

Elements of feminism and malevolence come into play, as two young women El and Vee realize something is terribly wrong in their town. Years ago a fire moved underground into the coal mines, forcing their closures and gutting an already fragile economy. In addition, women began to exhibit strange episodes in which they were losing large portions of their memory. When this seems to happen to the two friends on an evening at the movies, they want answers. Readers then discover there is already a layer of magic, as a strange deer/human hybrid is sighted, skinned men are hiding in the woods, and there are rabbits everywhere with human eyes. There is somewhat of a Paper Girls vibe in this story, further supported that El and Vee ride their bikes everywhere, but late in the story the narrative takes a sharp and confusing turn. A witch who is trying to combat the cruelty of the men in the region, as previous sexual assaults are implied in the story but not seen, but her spells don’t always work the way she intended. The remainder of the story is the young women trying to give agency back to the women affected by the dark magic.

The illustrations by artist Dani are dark with a color palette using a lot of black and red. The panels are varied, often with a large picture with smaller ones layered on top with black gutters. But the lines can be imprecise and lacking details. For example, El who is a larger woman is often drawn blocky. But I did appreciate that the various characters were given a diverse look. There was a lot of dialogue and information given in text boxes, with a small font that made reading challenging.

I have read a previous short story, Blur,  by the author Carmen Maria Machado through LeVar Burton Reads, and she is known for her LGTBQ+ storylines in the horror genre. While this story wasn’t exactly to my liking, I like how Hill House Comics is using a variety of authors to reach different audiences. I was pleased to receive an advance copy through NetGalley and I plan on reading more of this label’s graphic novels!