So Much For Love: How I Survived a Toxic Relationship 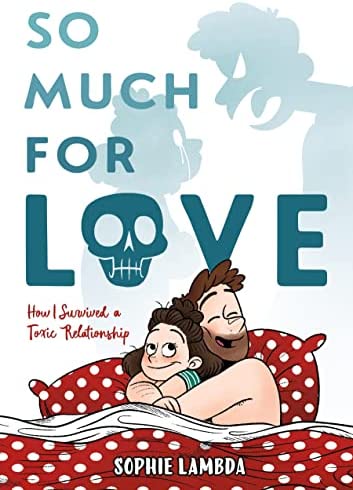 Part memoir, part self-help book, Sophie Lambda is a French illustrator who shares her disastrous love affair with a narcissist.

Sophie meets television actor Marcus at a Paris party and feels an immediate connection. After they re-meet months later they begin to correspond by texting and soon arrange to meet. The relationship progresses quickly and Sophie falls deeply in love. Marcus also declares his love for her and she feels like a new woman. As time goes by, cracks appear, but Sophie makes excuses for these first signs. The highs with him are just so wonderful that she balances the lows for far too long. Plus, Marcus expertly manipulates her making her doubt herself and he separates her from friends that would have noticed his toxic behavior.

Two-thirds of the way through this graphic novel, Sophie finally breaks it off with him, but the drama is not over, as he lies to others and tries to cover his multiple affairs. She begins therapy, as she is devastated and unable to recover from her emotional turmoil. Her therapist guides her through how to recognize a manipulator, and she realizes that there were signs early on that she swept under the rug because she was blinded by love. With a few stops and starts, she regains her life and her sanity and ends up helping Marcus’s next girlfriend when he continues his unhealthy patterns. Thus the last third of the book is a self-help manual, as Sophie shares her hard-won wisdom with others who might find themselves trapped in a toxic relationship.

The art is delightful, as Sophie takes a self-deprecating look at her life and builds comedy into it. A trash-talking teddy bear (unseen to all but herself) is her ally, and she isn’t afraid to show her own foibles. She keeps to a simple black-and-white color scheme, adding some blues and reds on occasion to amp up the emotions. Paris and French countryside landscapes are additionally appealing and the 300-page book goes by quickly.

While I have been lucky in love, I have witnessed unhealthy relationships in my extended family and in some friends’ lives. So while I may not have experienced these pitfalls myself, I hope this guide could help me be a good aide to someone who might need a hand in the future.