These last two volumes bring this series to a close! Read on to find out if I found the entire run wicked or divine!

This volume proved to be very atypical…it doesn’t continue with the big reveals from the previous volume…instead it is an interlude of historical specials that had been released at different times during the five year run of the series.

455 AD- You think you know how Rome fell to the German Vandals? Think again! Artist André Araújo drew great historical backgrounds but was not as precise with his humans.  Color by Dee Cunniffe and Matthew Wilson.

1373 AD- Lucifer and Ananke have a battle of wits, as Ananke reveals she has brought the plague to Europe and beyond which resulted in the Black Death. There are religious overtones to this story as Lucifer is a mix of demon and nun. Art by Ryan Kelly and colors by Dee Cunniffe and Matthew Wilson.

1831 AD- Love this one- it features the Gods as Lord Byron, Percy Bysshe Shelley, Mary Shelly and Claire Claremont during their famous retreat in Geneva in which the novel Frankenstein (for a beautiful retelling of the real Mary Shelly’s life read Mary’s Monster) was started. The art by Stephanie Hans was dark, lovely and appropriately Gothic looking.

1923 AD- This story read more like an Agatha Christie novella for it was very text-heavy with limited illustrations. Previous visits to the past cycles were but vignettes, but this story was very fleshed out and had direct connections to the modern-day cycle. By the time you read this story, you can catch Ananke’s manipulations that will crop up again. The Art Deco type illustrations by Aud Koch were outstanding and really added to the story.

We then have the uneven Christmas Special that included some vignettes of the Gods before they were chosen and some afterward- let’s just say there was a lot of sexy time. Then there are the Funnies- that included other artists making fun of the series with the Scooby-Doo parody being my favorite.

This is it! Can Gillen and McKelvie bring this series to a satisfying close? Since Volume Eight was basically an interlude (although two of the previous historical stories will tie-in to this one), we basically are picking up from Volume Seven’s action.

Woden, Minerva and Baal are planning a concert to suck the energy of the Gods and concert-goers to supposedly prevent The Great Darkness, although Baal is but an unknowing pawn in the first two’s evil plan. Sadly, Baal’s justification for this mass-murder is due to Ananke’s previous manipulations of him.

Persephone has clued into Ananke’s manipulations and who she is masquerading as. She rallies the remaining Gods to stop the concert…but things don’t go as planned (of course). There are some more reveals, some deaths, some rebirths and a lot of fighting and chaos that occurs as the remaining Gods group together for the final showdown. As I don’t want to spoil the ending or let on who survives and who doesn’t, all I can say the final confrontation is epic. Many puzzle pieces are finally joined together, with connections to the past, but ultimately it is our advanced, modern technological world that finally thwarts Ananke. An epilogue ends the series on a somber note, and its slower pace lets you reflect on the nature of how we perceive others and how we let other’s perceptions of us color ourselves. As Laura, formally Persephone, wisely states, “Dreams aren’t real”.

The art in this series was absolutely divine. For a huge cast of characters, each God was inked with attention to detail and was so incredibly distinctive. The colors added maximum visual impact -with certain hues matching each God’s personality. There were unique panel configurations and the story always flowed. McKelvie, Wilson and Cowles have a partnership that rivals any other artist teams out there, for their style, colors and lettering can’t be beat.

This contemporary fantasy skewered celebrity obsession and media culture in a truly thought-provoking way…and yet, it was so damn confusing at times! There were several times I almost gave up on this nine-volume series, yet I persevered because the unique narrative and outstanding art kept pulling me back in. Ultimately, this series proved to be more divine than wicked, and I’m glad I finished it.

Catch up on the previous volumes:  One, Two + Three, Four + Five and Six + Seven 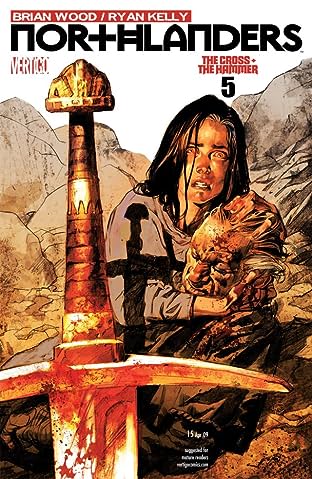