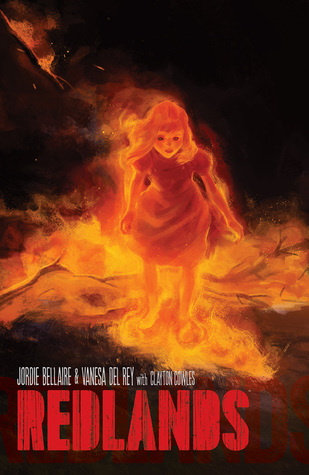 A trio of witches take over the rural Florida town of Redlands, and play both victim and villain as the years go by.

Volume One: Sisters By Blood

The story opens in 1977 when the corrupt Redlands police force are trapped inside their police station when a lynching of the witch coven goes sideways. The three witches- Alice, Ro and Bridget- demand sacrifice to remain strong and many officers are killed. Skip to modern-day, and the women are masquerading as police detectives who are dealing with a magical serial killer who seems to be on to them. There are some additional flashbacks to 1984 and a sex trade cartel that Bridgit is trying to infiltrate. I was rather confused at the end because it seems as if the soul of a teen prostitute long-dead inhabits Bridget’s body and wants revenge years later. In the midst of this, there are lots of sexual encounters and violence, but the idea of these flawed witches trying to right some wrongs was enough to capture my attention and wonder where the story will go next.

I am familiar with the author, Jordie Bellaire, as a colorist on many of my graphic novel reads, so it was interesting to have her in another role. She mixes together an interesting horror and feminist vibe, reminiscent of Hex Wives that I read recently. The artwork is very sketchy, which I’ve noticed more of lately, and isn’t always a very attractive look. The women are drawn with a realistic but seductive look, as the female artist, Vanesa Del Rey, understands the feminine body. The coloring is dark to represent the swampy bayous of the region and the murky narrative.

Volume Two: Water On The Fire

After finding volume one intriguing, I looked up volume two to reserve but, but when I saw the cover there was no way I was going to order a copy through inter-library loan for my co-workers to see! Luckily, I found a copy through the online service Hoopla to read. While I am no prude, I was disappointed the cover is so very gratuitous.

This volume begins with a visit to the past- the way-back past! We find Alice in ancient Egypt (why would she be named Alice back then??), Ro in Viking era Ireland, Bridget during the Salem Witch Trial time period and their “Father” in all three eras who turned them all into witches and demands obedience. We learn more about Bridget’s police partner Casper (who is a ghost, hence the name), Ro’s adopted clairvoyant daughter Itsy, Bridget’s sometimes lover Laurent, and the revenge-seeking teen prostitute Nancy who is still inhabiting Bridget’s body- and it is becoming difficult to keep all the details straight.

This volume ends in a cliff-hanger of sorts- the witch’s evil father is pulling strings and setting the three women up to be on opposite sides of a crisis that only can result in bloodshed. It has been over two years since this volume with no more issues on the horizon, so my guess is the series was dropped. No loss- while it started out promisingly the narrative threads became too convoluted for me to understand or really care about. The artwork didn’t help, for it was often too scratchy and dark to pick up on details that might have helped carry the story. I hope that Bellaire keeps on writing, she just needs to streamline her stories.