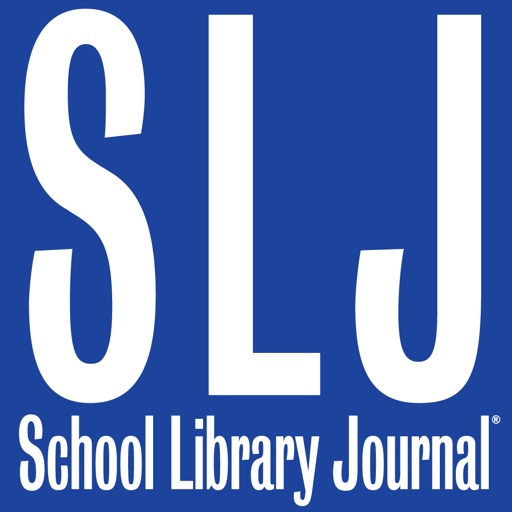 I have been reviewing YA books (plus one graphic novel!) for the magazine School Library Journal for a year now, but haven’t really advertised that I was doing so, as this blog mostly revolves around graphic novels, but I thought why not share these great books since I’m (half) boss of this blog! Reviewing has been interesting, as I am limited to 250-300 words for each review, and can only share once it has been published with their edits. All the books have been worthwhile, so afterward I’ve purchased them for my library collections once they are available for purchase.

Better You Than Me by Jessica Brody

Two 12-year old girls, Disney-esque star Ruby Rivera and her biggest fan Skyler Welshman, meet on the set of Ruby’s hit television show and improbably switch bodies by accident. At first, thrilled with the situation, each tween believes the other has the better life in this Freaky Friday-like storyline. Due to various scheduling constraints, the girls plan to meet in several days to switch back. Meanwhile, each girl’s assumptions about one another are put to the test as they struggle to cope with scenarios they never expected and to make the best of their new lives. Brodt takes a common trope and freshens it up with realistic details. Whats starts out as a formulaic plot device evolves into a strong story about appreciating friends and family and making good choices. The alternating chapters with each girl’s perspectives gave each chapter a distinctive voice.

* Review published in the September 2018 issue of School Library Journal on page 102. 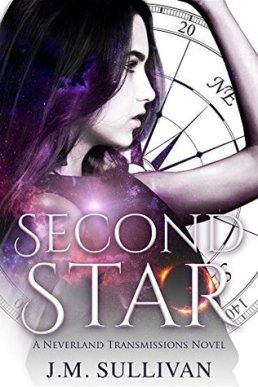 Peter Pan is reconceptualized in this futuristic space fantasy with rogue Captain Hooke crash landing on the mysterious planet Neverland as his crew was mutinying. Ace mechanic Peter and his motley group of deserters take refuge away from the main ship and settle into life away from the devious captain. One hundred years in the future, the Londonierre Brigade receives a transmission from Hooke, and newly appointed Captain Wendy Darling leads her own crew across space to rescue the survivors of the Jolly Rodger. Once they arrive, loyalties are tested and the two crews fight an evil that could consume the universe.

Alternating chapters between Peter and Wendy’s point-of-view establish the character’s backstories, however, the world-building is slow before the story begins to gain momentum in the last half of the book.  Author JM Sullivan works mightily to stay within the classic story’s framework, but sometimes to the detriment of the story. A cliff-hanger sets up the narrative for a sequel, which might allow the series to evolve as it won’t need to hew so closely to the original fairytale.

*The review can be found online here.

All The Walls of Belfast by Sarah Carlson

American teen Fiona travels to Belfast, Northern Ireland, to reunite with her father whom she has not seen since she was a toddler. Having no memories of her older half brothers or her birthplace, Fiona tentatively begins to get to know her family and explores her culture and community. She discovers her Catholic father was formally a key member of the IRA and his bombs killed many people during The Troubles, a time when ethnonationalism led to violence between Catholics and Protestants. Fiona meets Danny, a Protestant who is studying for his school finals and wishes to join the British Army as a nurse against his gangster father’s wishes. The two begin to see one another, but their parents’ pasts threaten their relationship.

Alternating chapters between Fiona and Danny establish their family dynamics, and then allows the reader to root for them as their believable romance blossoms. Author Carlson creates an atmospheric narrative, explaining just enough of the current political and cultural landscape to understand how the walls running through Belfast still affect both communities on either side of it.  The story doesn’t shy away from showing gritty reality and dysfunctional families that are partly due to the conflicts that ended only fairly recently. This contemporary drama has an appealing romance and the nuanced story may push teens to think critically about religious and cultural differences, and ultimately about forgiveness. 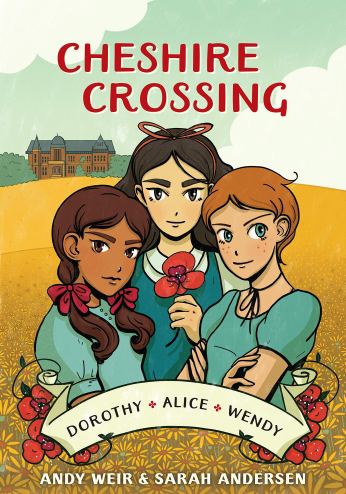 Dorothy from The Wonderful Wizard of Oz, Alice of Alice’s Adventures in Wonderland, and Peter Pan’s Wendy are now teens and very misunderstood- no one else believed their wild stories, and they were diagnosed as delusional. However, the teachers at the boarding school Cheshire Crossing believe them and know that each one possesses amazing powers. When the girls’ fantasy worlds collide and Captain Hook and the Wicked Witch of the West band together, the three teens must harness their talents to save humanity. Weir, author of the sci-fi book The Martian, and Andersen known for her funny webcomic Sarah’s Scribbles, may seem an unlikely pair, but they pull it off admirably if not perfectly. The world-hopping is at times confusing and the character of Nanny is unnecessary. Several swear words and references to sex make the tale more appropriate for a YA audience, although the charming illustrations might attract younger readers. The art is appealing, with eye-catching details. A lovely red poppy motif appears throughout the narrative and Anderson uses bold colors to depict the fantasy realms. The epilogue hints that the girls’ adventures are not done, with another familiar villain ready to take center stage.

*Review published in the June 2019 issue of School Library Journal on page 86.

The Last True Poets of the Sea by Julia Drake

Violet is an out-of-control NYC teen who is shipped off to her mother’s hometown in coastal Maine after her younger brother attempts suicide and her parents try to get a handle on both of their children’s problems. While living with her uncle, Violet is forced to volunteer at the aquarium in town. While there, she makes friends with some of the local teens and begins to research her family’s origins, with help from her new friends Orion and Liv. Supposedly her great-great-grandmother survived a shipwreck and was a founder of the community. Violet’s search for answers about her mysterious ancestor mirrors some of the journey she and her brother Sam are on.

Debut author Drake has created an authentic and romantic tale, loosely based on Shakespeare’s Twelfth Night, that shows that life can be embraced again even after enduring a tragedy. Teen sexuality is respectfully addressed with a frankness that is welcomed. The realities of questioning yourself and the deep emotions that go with falling in love are ably displayed with the burgeoning relationship between Violet and Liv. Sibling bonds and the importance of family also balance out this narrative about battling grief and building bridges to a better tomorrow.

* The on-line review can be found here. 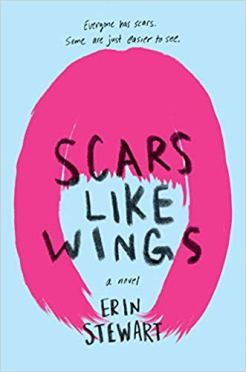 Ava has endured soul-crushing tragedy- her parents and cousin perished in a house fire, leaving Ava the sole survivor but with terrible burns all over her body. One year late she is released from the hospital after enduring skin grafts and surgeries. Moving in with her aunt and uncle who are grieving the loss of their daughter, Ava is encouraged to go back to high school, but she resists knowing her considerable scars will make it hard to make friends. In a support group, she meets Piper, another burn survivor from her new school, and the two girls bond together while trying to navigate their new realities. Ava is encouraged to get involved with the school play, as she had loved singing and the drama department at her old school. But Ava has to endure the cruelties of some, while also discovering new allies and a resolve she never knew she had.

The research that debut author Stewart did to write such an insightful book about burn recovery is evident. She also capably showed how Ava and her aunt and uncle come together to form a new family unit despite crushing grief. Stewart also captures the highs and lows of teen friendship. An interesting facet of the friendship between Ava and Piper was the often unhealthy dynamic between the two and could push teens to explore where they would draw the line regarding boundaries between friends. Ava’s journey toward healing, both physically and mentally, is thought-provoking. Not all scars are evident to the eye, and this narrative will push readers to think deeply about empathy, hope, and resilience in the face of heartbreak.

*The online review can be found here.

I have another book review that I just submitted, so perhaps down the line, I’ll share again once I have several to post.