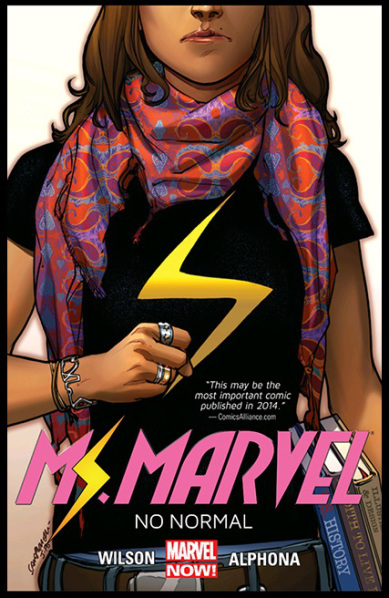 I’ve heard a lot of good buzz about Ms. Marvel, so I checked it out to see if the hype was accurate, and I’m happy to report it really was. As an origin story, it hit all the right spots- we were introduced to Kamala Khan who is a relatable Muslim Pakistani teen; and we are given background on her family, school and identity issues. Kamala comes from a devout and traditional family, so all she can see is how different she is from her high school peers. Her love of the Avengers represents her wish for everything she is not: to be blonde, powerful and sexy. When a mysterious mist takes over the city one night she is at a party, she gets her wish-suddenly and without warning, she is transformed into the retro Captain Marvel. Kamala is confused and struggles with understanding and harnessing her new Inhuman powers. The rest of the story deals with who Kamala confides in, how she establishes her own identity and look (thus, she takes the name Ms. Marvel to differentiate from the original version), and how she can balance fighting evil with a curfew from her loving but in-the-dark parents.

The illustrations remind me of Manga art at times, for some of the panels are intricate with much detail, while other panels are cartoonish in nature and show oversimplified caricatures of some of the characters. The colors are muted, almost washed out, but are appropriate of a city setting. Strange animal mascots are hidden in many pictures, with the animals appearing more often once Kamala becomes Ms. Marvel. I was puzzled by this and was wondering if there was an explanation as to how and why the animals are part of the storyline. Adorable yes, but also somewhat distracting to me as I glimpsed them. Humor was an added bonus throughout the story and was a good balance to the more serious aspects of this graphic novel.
I definitely want to read further issues and get deeper into Kamala’s odyssey as a new superhero. Having her meet the Avenger’s team in the future (beyond the confusing  “vision” in the mist), and finding her place as a hero, friend, daughter and young woman will be a journey I want to take with her.