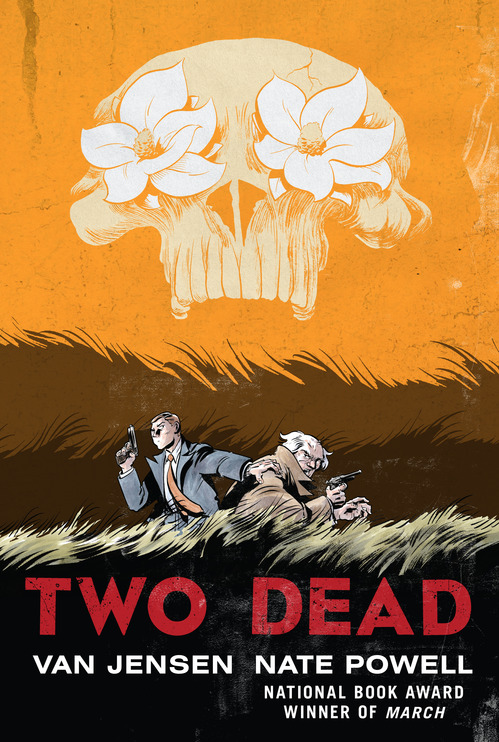 When I saw this graphic novel was drawn by Nate Powell, the artist of the excellent March trilogy, I knew I wanted to give it a chance just based on that and eagerly requested it from NetGalley. His collaboration with author Van Jensen proved to be strong and I enjoyed this historical drama.

Gideon Kemp is a soldier who is fighting PTSD, who has recently returned from WWII and accepts a job as a police lieutenant detective in Little Rock, Arkansas, in 1946. As Gideon is an idealistic rookie, Mayor Sprick warns him against the mob in the city and problematic Chief of Detectives Abraham Bailey. The officers are fighting a sadistic serial killer, and this white police force comes up against Chief Jacob Davis and his black police force when a victim is found in their jurisdiction. Ugly racial prejudices are shown, with postering and threats made, when the two groups should have been working together for the greater good.

Mob activity increases and Chief Davis tries to keep his brother Esau out of it, as racial tensions are about to explode. In the midst of this Chief Bailey is shown to be unstable, with lingering effects of guilt and schizophrenia affecting his everyday actions. All four men are caught up in the ugly cycle of violent segregation and are drawn together in an explosive finale. A fellow cop’s statement becomes symbolic, “Stay a cop long enough you go down one of three paths: you become a cynic, a reformer or a drunk” as justice is not always achieved.

Powell helps the book come alive, and makes the narrative flow through his powerful black and white illustrations. His work is historically accurate and he faithfully duplicates the era. Black backgrounds when there is violence was emblematic, but on the other hand, hard to follow. With a lot of speech bubbles to keep track of, I felt I was missing part of the story, for I was trying so hard to read the conversations that had small lettering. A second read of the story when it is published will be necessary to catch what I missed in the online version.

Far from a light read, author Jensen created a layered thriller, that was inspired by true events. I applaud him and Powell for showing how some deep-seated issues resulted in social ills for everyone in the community, and that they didn’t shy away from showing the tragedy that unfolded because of it. 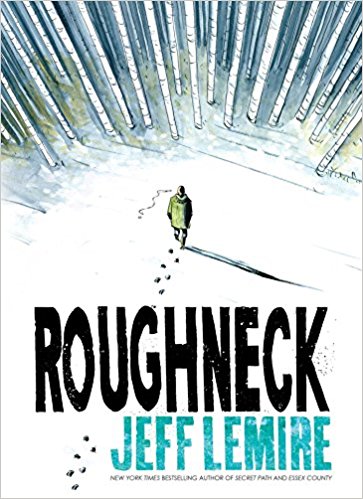 Roughneck is a beautifully told standalone tale of a brother and sister’s quest to reconnect with one another and their cultural identity written and illustrated by the talented Jeff Lemire.

The story opens in the fictional small town of Pimitamon in northern Ontario, Canada, which means “crossroads” in Cree. This detail is important as it is symbolic for the theme of the story and recognizes the heritage of the main characters. We meet Derek Ouellette, a hulking former NHL player, who was kicked off his professional team for excessive violence on the ice. While he is a local legend, he is always on the defense for he is often baited by antagonistic men, eager to brag that they fought with the drunken brawler.

Derek has the support of Ray, a former childhood friend now turned police officer, and Al an older man who manages the ice rink in town. He will desperately need their help when his sister Beth comes back into town as she is addicted, pregnant and on the run from an abusive boyfriend. The siblings reconnect after many years apart, as teen-aged Beth had ran away when Derek left to join the NHL. When Beth’s drug addiction issues come to a head, Al lets the siblings use his hunting cabin out in the bush, so Beth can detox. Alone for the first time in years, Derek and Beth reminisce about their childhood with a Cree mother and a drunken white father. Tragedy in their family shaped them into who they are now as adults, but both want to break free of the violence and despair that engulf them, thus the symbolic crossroads from earlier comes into play.

Lemire handles the storyline of Derek and Beth’s Cree heritage with grace and respect. The sibling’s began to appreciate their heritage and take some steps in reconnecting with their mother’s family. The reality of native families becoming disenfranchised from their cultural heritage, is mirrored in the excellent book The Outside Circle, which also deals with First Nation individuals whose circles of community were broken which led to fragmenting generations of people with no connection to their tribe anymore. The ending is open to interpretation, and while I at first looked at it one way, re-reading it I see a more melancholy but poignant way of concluding the story.

The artwork is trademark Lemire, with sketchy and minimalist lines. Most of the story is in black and white with overlays of blue wash, which effectively shows the icy coldness of Canadian winters. There will be an occasional splash of red, showing the blood that Derek beats out of others. When the story has flashbacks to the sibling’s youth, more color is introduced, but with soft water colored hues. He captures the feel of small towns with their varied local inhabitants, and showcases the beauty of rural landscapes.

I enjoy much of Lemire’s work for Marvel, DC & Image, but it is his stories in Essex County and Roughneck that truly show his skill as an outstanding storyteller.