The Legion of Monsters

What better way to celebrate Halloween than with the 1975 first (and only) issue of The Legion of Monsters?

A few years ago I was at the Naperville Graham Crackers comic book store with my husband when I admired a fantastically kitschy painting of three monsters. My awesome husband then surprised me with the picture at my next birthday, and I proudly put it up in my living room every October. When I put up a photograph of the painting on my wall on Twitter, Graham Crackers noticed and told me that it was based off the classic Legion of Monsters cover and they sent over a copy to the DeKalb store for me.

Pulling out the musty magazine out of it’s plastic covering was a walk through another era and I loved it! There were four stories along with a letter from the editor, a monster movie update and gloriously dated ads.

Frankenstein is just lounging around some city alleys when he sees a beautiful women running by on her way to a Halloween party. Following her in, all the sexy revelers assume he is in costume and talk to him and offer him alcohol. Cynthia believes him to be the strong silent type and dances with him. But he is later fooled by her murderous husband and the murder is pinned on him. Well, Frankenstein won’t stand for that! 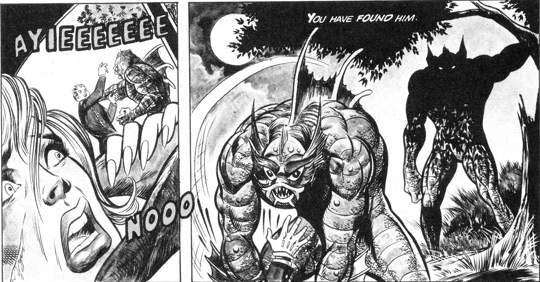 A rip off of the Swamp Thing, two aliens emerge from an oil rig, after being trapped for eons. One is clearly the villian, having killed the other’s mate years ago, and he is bent on destruction. The other tries to save a woman who was at the wrong place at the wrong time, but both manphibians are hunted by the oil rig workers as well as the owner of the oil company. Both monsters escape, but the hunt is on…

A “freak” formally from a circus sideshow has taken up residence on the outskirts of a town. Some boys and men taunt him as he collects garbage to bring back to his shack where he cares for flies, and he finally snaps when one of the boys sneaks into his home and destroys his fly friends. When a police officer checks for the missing boy, he is horrified as to what Chuckles did for revenge. The art reminds me Mad magazine, for it is deliberately caricature like.

A long prologue covers previous chapters (found in other magazines) and then advances the story of Lucy as she was being converted into a vampire, and how Dr. Van Helsing and the men who loved her tried to save her. Appropriately Gothic looking, this story begged for more chapters.

In addition to the epic stories, the ads that skewed towards males are cringe worthy now. So many mail in advertisements, but they were that era’s pop-up ads that we have on our computers today. This was such a fun read, and I want to thank Graham Crackers for bringing it to my attention!

*I copied the magazine pictures from a review on Marvel University (scroll down quite a bit to find it).