Ronan and the Endless Sea of Stars 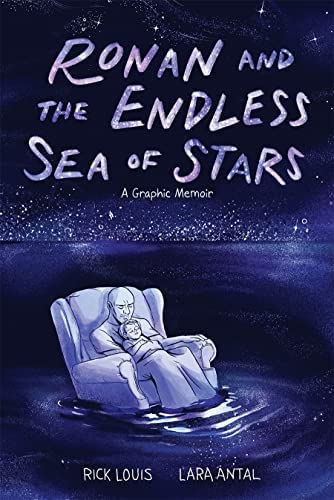 This beautifully written memoir of child loss is gut-wrenching, yet also affirming. The author, Rick Louis, shares the loss of his toddler son to the debilitating and always fatal Tay-Sachs disease.

He and his wife Emily were thrilled at Ronan’s birth, but within a few months, they started to notice that Ronan was not hitting developmental milestones. But it wasn’t until an eye exam, that the truth was revealed, and they discovered there is no cure, with children typically not living beyond their third year. Despite therapy, Roan’s health declined, and sadly, so did Rick and Emily’s marriage. Unfortunately, grief destroys many marriages that undergo the loss of a child, thus this was a double loss to the little family. Ronan’s death is depicted tenderly, and I ached for the parents. Despite being a mother, I actually connected much more with Rick than Emily, although he does his best to be fair to his ex-wife and what she went through.

Artist Lara Antal illustrated the bittersweet narrative in black and white with shades of blue. These colors conveyed the somber mood and gave an accurate depiction of the family. The pictures flowed into one another, using few panels. The illustrations varied from factual to whimsical and spanned the entire gamut of emotions. The art matched the tone of the book, and you can tell great care was taken to share Rick’s story with respect.

After I read the story, I looked up some of the resources listed and found out that Emily has remarried and has another child. I’m unsure if Rick has remarried or had other children, but a quote of his, “Being Ronan’s father was the greatest thing that ever happened to me. Sometimes I think taking care of him was the only truly important thing I ever did in my life. If it meant that I could see him just one more time, I would do it all over again. Even knowing I had to lose him”, touched my heart. I admire his honesty in sharing his memories of his sweet Ronan with the world and I hope it was cathartic for him.