It Ends With Us & It Starts With Us 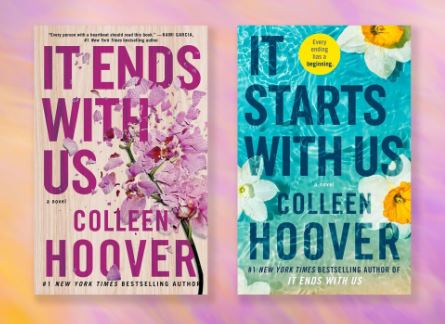 Many of the author Colleen Hoover’s books are on best seller lists, so I decided to request her most popular one and give it a go. The novel proved to be a mixed bag for me- I thought the domestic violence angle made what I thought was going to be a typical love triangle storyline much deeper, however, I still had issues with it. *Some spoilers ahead*

It Ends With Us

Lily is a new college graduate who is new to Boston and left reeling from her abusive father’s recent death. She has a meet-cute moment with cocky surgeon Ryle and then re-meets him months later when she implausibly opens a florist shop and hires his sister who becomes Lily’s best friend. During this time she is re-reading her HS journals that detail her relationship with her first love Atlas, who also came from an abusive family. Lily and Ryle start dating, so of course, she bumps into Atlas who is a chef at a trendy restaurant he recently opened. But she stays with Ryle and marries him, who is charismatic but has anger issues, that eventually boil over into several instances of domestic abuse.

As I too had an abusive father, I could relate to Lily and thought it was sadly realistic how she kept on excusing Ryle’s behavior and staying with him. But I took affront to Lily’s extended decision on whether to leave him, as I found the distance he gave her and the access to money and the apartment highly unrealistic. Most women when trying to leave an abusive partner have extremely limited options, and that’s why so many women stay. In an afterword, Hoover shared IRL that her mother had to leave her father and was poor while she struggled to get back on her feet, so I found this perfectly crafted ending a disservice to real abused women who don’t have that luxury when leaving.

Nevertheless, I do plan on reading the sequel. I loved Atlas, and want to read his side of the story. I also want to see how Hoover chooses to portray Ryle, who made my skin crawl even before the abuse started.

It Starts With Us

This sequel is the author’s gift to fans who fell in love with Lily and Atlas. Hoover was already a popular author, but readers on TikTok (aka BookTok) catapulted her books onto the best-seller list with their online recommendations. I heard she hadn’t planned on writing this book, as the first book established that Lily and Atlas would have a HEA, so this is basically a thank-you to readers of her books.

Almost a year out from Lily’s daughter’s birth and her divorce from Ryle, she remeets Atlas and they quickly fall in love again. Of course, there are the speedbumps of Ryle’s jealousy and that Atlas takes in his previously unknown preteen half-brother. But their renewed love story is sickeningly perfect and the novel concludes on their wedding day.

I don’t wish to be overly critical, for I too shipped Lily and Atlas, and I thought the domestic violence angle of the first book made what I first thought was going to be your usual love triangle narrative more engaging. I appreciated that Hoover didn’t try to overtly redeem Ryle in this story, he remained an abuser who needed to radically change his ways. Overall, this was a sweet romantic book that all Lily and Atlas fans will enjoy!

Colleen Hoover, It Ends With Us, It Starts With Us

2 thoughts on “It Ends With Us & It Starts With Us”