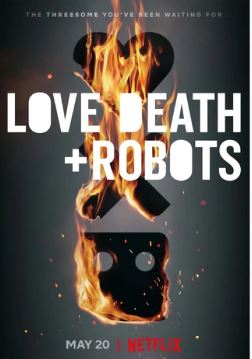 Love Death + Robots is back with season three! With a scifi/fantasy concept, the different episodes somehow play to the themes of love, death and robots (although not every episode has a robot per se) and are very adult in nature. In fact, a quote that they are for “mature, messed up adults” is right on the money. I feel seen by that description!

The animation styles differed wildly from episode to episode, with some being cartoony while others were photo-realistic. Some of the stories were funny, others heartbreaking, but all were good in their own way. Often in a collection of short stories, there will be some clunkers, but all of the episodes were strong.

The three wise-cracking robots from season one have yet another post-apocalyptic trip, surveying the wreckage of a planet whose people died, when greed and poor planning doomed them. Of course, there are uncomfortable parallels to our world today. It had a cutesy animation style.

A thanapod, an enormous man-eating crustacean, boards a ship and attacks the sailors. They are forced to sail it to an island so the giant crab can attack the inhabitants, but the captain wants to fool the creature by sailing to a farther away uninhabited island, putting the crew in danger for longer. When the crab has babies, the danger increases- who will prevail?

The Very Pulse of the Machine

An astronaut is exploring Jupiter’s moon Lo, when her partner dies in an accident. She begins to hallucinate as she tries dragging her partner’s body to the space shuttle. I was unclear what really happened at the end.

Night of the Mini Dead

Animated to remind you of GI Joe, a team of Green Berets encounters a cybernetic bear. Don’t become too attached to any of the characters! This episode had some fun raunchy dialogue.

A scientist travels to a planet to study its ecosystem and meets another researcher there. They are both amazed at how the animals co-exist within a caste system, and he hopes to utilize them to benefit Earth. Threatened, the swarm assimulates one of the scientists, but the other vows to fight against becoming a symbiote species to the intergalactic hive.

In a futuristic Scotland, a farmer’s barn is overrun by rats. He calls in a pest company and hi-tech machines battle the rats until a truce is called. The animation was Pixar-ish and relied on sight gags.

A team of soldiers try to rescue a hostage and get lured into a mountain tunnel and are soon surrounded by Lovecraftian creatures. Their numbers are depleted until only two soldiers survive when they are confronted by a Cthulhu-type diety. One soldier is seen staggering away, but her eyes and ears are missing and she is muttering an alien language. What awaits her and anyone she encounters?

This was a perfect episode to conclude the season with- it was so amazingly unique with outstanding life-like animation. Based on a Puerto Rican folktale, a group of conquistadors and priests get seduced by a siren who lures them to their death in a lake. A deaf knight survives and two become entranced with one another. But when he leaves her for dead, and her blood restores his hearing, he too joins his comrades in a watery grave.

My favorite two episodes in this short season were Bad Travelling and Jibaro, but this series has something for anyone no matter what type of art style or storytelling they prefer. Here’s to hoping for a season four!