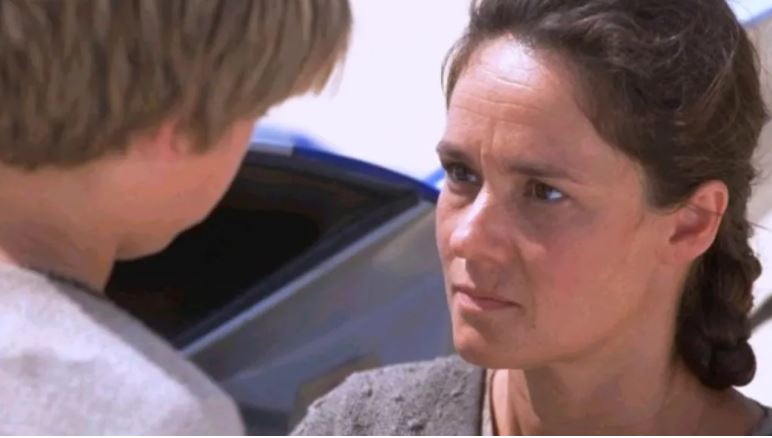 March is Women’s History Month, and both of us here at Graphic Novelty² have joined forces for the fourth year with some other amazing bloggers to celebrate women under the auspicious blogging series title of: Fiction’s Fearless Females! During this month, we will have five bloggers sharing who they believe is a fictional woman or women to be admired, and we will share each entry of the series on our blog. Today’s post comes from Star Wars expert Jeff of The Imperial Talker who discusses adventures in a galaxy far, far away…

Young Anakin Skywalker turns and runs back to his mother, telling her that “I just can’t do it mom.” Offered the chance to flee his life of slavery on Tatooine, to travel the galaxy and become a Jedi under the tutelage of Master Qui-Gon Jinn, the 9-year-old boy has a reasonable moment of doubt. He has only ever known this life with Shmi, his mother. As an audience we know very little of their life prior to meeting them in The Phantom Menace, only small bits that are often short on details. Anakin and Shmi used to be the property of Gardulla the Hutt and are now owned by the junk dealer Watto. Shmi has taught Anakin to care for others who are in need, and she says he has no greed. Anakin is the only human who can fly a podracer, having incredible reflexes that are uncommon for a human. We learn these and other facts, but they remain superficial, lacking any depth to better understand the trajectory of the life Shmi and Anakin have lived together. When Anakin says he does not want to leave, and his mother never-the-less insists “don’t look back,” we are otherwise lacking any meaningful understanding of what looking back truly means.

Except, there is one very important piece of information that we did learn that something that is stunning and adds incredible depth to both characters. At one point, Master Jinn enquires about the boy’s father, wondering who he was. To this, Shmi offers something startling. “There was no father,” she tells the Jedi Master, “I carried him [Anakin], I gave birth, I raised him, I can’t explain what happened.” In other words, Anakin is quite literally a miracle.

Qui-Gon Jinn takes this information and runs with it, taking a blood sample from Anakin that evening, a sample which confirms what he already suspected, that the boy has a unique and powerful relationship to the Force. Curiously, though, Qui-Gon takes no further interest in Shmi other than briefly wanting to free her from slavery along with Anakin, something he is unable to accomplish. Once Anakin is freed, with plans set in motion for the boy to join the Jedi, Qui-Gon will also ask Shmi if she will be alright, but this is a question that Shmi has little time to contemplate. Her son has been set free, he can now leave the arid sands of Tatooine for a better life, something she could not offer him.

It is unsurprising that Qui-Gon’s focus becomes freeing Anakin. Afterall, The Phantom Menace is a story about the discovery of Anakin, the “One who will bring balance to the Force,” and his first steps on the journey to becoming Darth Vader. The Star Wars saga which creator George Lucas crafted by adding the Prequel Trilogy is the story of Anakin Skywalker, of his fall to Darkness and his redemption, but this story is not possible without Anakin’s mother. She is the linchpin, the one character who was needed to establish his inevitable importance. All of the other characters, the events, the details, all of it could be different, could be changed for us to arrive at Anakin’s downfall. Shmi, however, is central to Anakin’s story. Even though she occupies a mere sliver in the great canon of Star Wars, she never-the-less plays one of the most critical roles.

Miraculous births are fundamental to establishing the importance of religious figures, and virgin births are incredibly common across a wide spectrum of religious traditions. Jesus is the most obvious and well-known example, born to the Virgin Mary, but he is not the only one. In one Aztec story, Quetzalcoatl was born to the virgin. A legend about the Muslim poet Kabir describes that he was born to a virgin Hindu. The list goes on and on (just google it). Thus, what Shmi describes to Qui-Gon Jinn follows this archetype, establishing Anakin’s special importance as a religious figure.

However, with Anakin as the focus of this miraculous information, Shmi becomes lost in the background. For a long time, I took Shmi for granted, never stopping to consider that her agency and voice in the matter is hidden behind the veil of Anakin’s importance. She could not explain what happened, we are but neither is she given the chance to explain whether she even wanted a child, not to mention any other reactions/emotions she felt when she learned a fetus was developing within her. As a man, I have no clue what it must feel like for a woman to discover that she is pregnant. I am incapable of understanding this experience, all I can do is listen and learn about what is undoubtedly a very personal and varied reaction from one woman to the next.

On this point, I am not suggesting George Lucas should have put words into Shmi’s mouth on this topic in The Phantom Menace. That could have just made things far more awkward. I do think, however, that Shmi Skywalker deserves to have her story told in a much more dynamic way that elevates her agency and voice regarding a pregnancy that was imposed on her, not chosen by her. We should not assume that just because Shmi could not “explain what happened” that this implies a passive acceptance of the pregnancy on her part. Instead, what she honestly tells Qui-Gon Jinn should be the jumping off point for a deeper dive into her lived experience, for this particular aspect of her story to be written by a woman or women in such a way that elevates her to the same level of importance as Anakin.

And that is the thing that I believe needs to be emphasized. Shmi Skywalker is just as important as Anakin precisely because she is, at the very least and in my opinion, an equal partner in the balancing of the Force. Like Anakin, Shmi Skywalker is also a miracle, she is the Divine Mother, and it is long past time that her story, her agency, and her voice are amplified.

Fiction’s Fearless Females is in its fourth year!  Yay!  The series runs for the month of March and along with myself feature pieces by Nancy and Kathleen from Graphic Novelty2, Kalie from Just Dread-full, Michael from My Comic Relief.  Be sure to follow each of these blogs and to check out all of the Fearless Females in the series. Just follow these links: