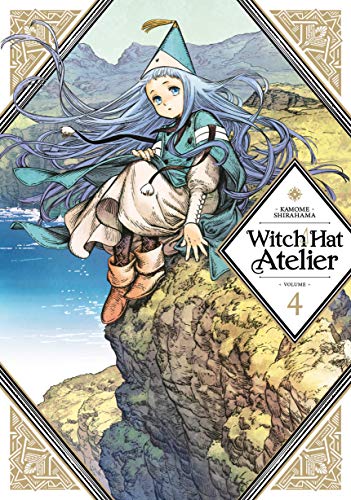 Master Qifrey’s atelier has just gotten a letter. Two of his students, ambitious Agott and solitary Richeh, are due to take their second test at Serpent Back Cave. Upon their arrival, they meet another master and his student, shy Euini. The second test, called Sincerity of the Shield, has the students shepherding myrphons (an adorable blend of penguins and ducks) through the cave to their nesting grounds during migration season. The path is ancient – and dangerous. More so when a member of the Brimmed Caps appears and creates trouble, both for the students inside the cave, and Master Qifrey and Coco outside…

Much development for secondary characters happens in this volume. We see Richeh in particular preferring to create her own spells instead of copying existing spells for practice. She is reluctant to take the test, but agrees to when she realizes she can do it her own way. This contrasted with newcomer Euini, who has failed the test twice before, by trying and failing to emulate what others have done before him. There’s great dialogue about doing things “right” vs. “wrong” vs. “your own way” and all three students taking the test learn from one another.

Speaking of tests, I am really enjoying the magic and testing system in this manga. It’s been my experience that many “magic school” stories have more written over practical exams for their students. This type of test, where the students are given a task to do, feels like it showcases everyone’s unique abilities better as well as fostering collaboration and character growth. This volume is a prime example of this reverse-trope done well.

This volume ended on the worst cliffhanger, so I’m very eager for the next one!