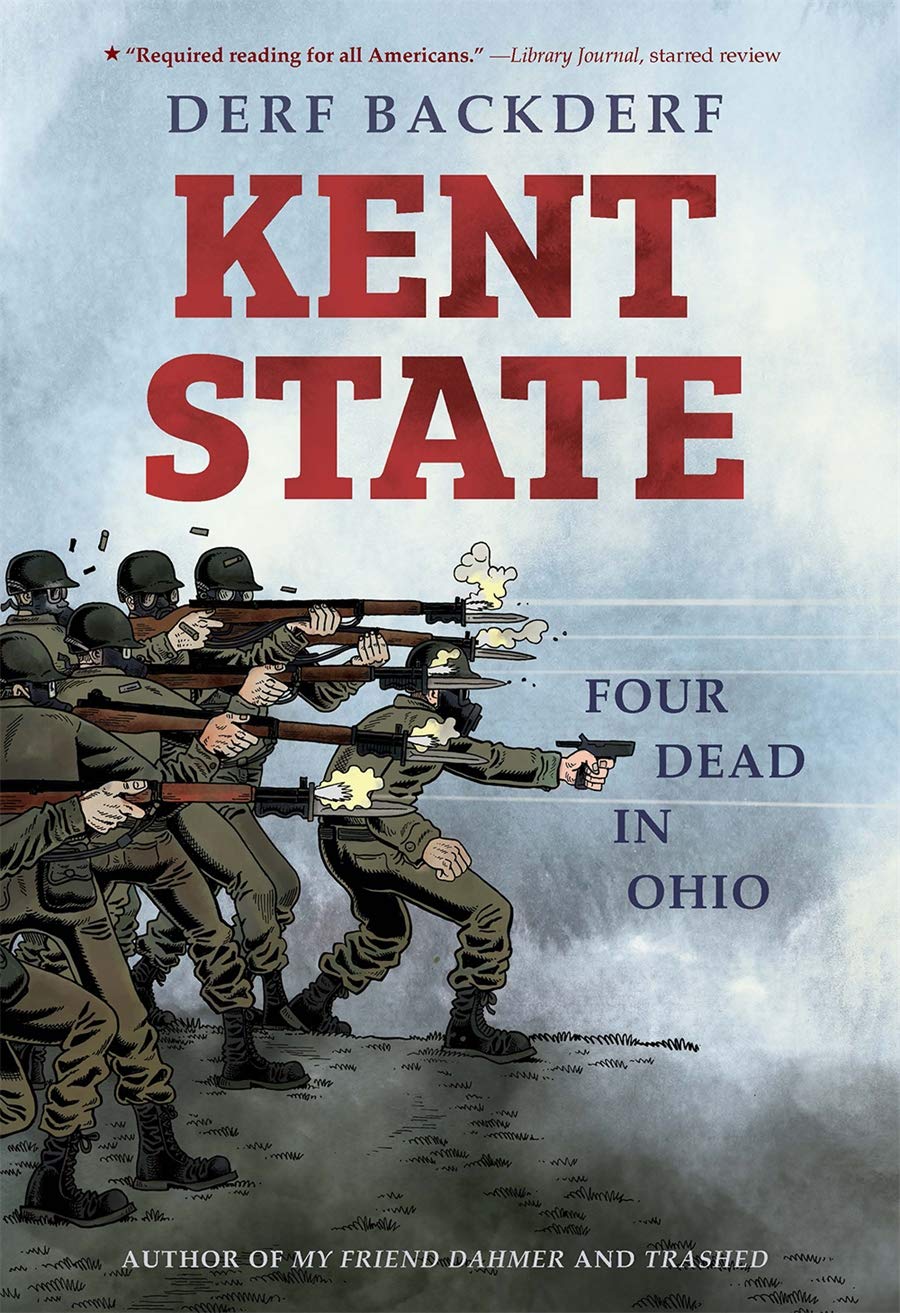 As a fan of Derf Backderf’s prior graphic novels (My Friend Dahmer, Trashed & Punk Rocks and Trailer Parks), I knew I wanted to read his newest book that gives a thorough look at the May 4th, 1970 tragedy at Kent State University in Ohio. Kathleen first reviewed this book back in February, saying it will most likely be on her top 2021 list, but I too wanted to give it a read.

Backderf recreates the days leading up to the shooting and we are introduced to four students- Allison Beth Krause, 19, Jeffrey Glenn Miller, 20, Sandra Lee Scheuer, 20, William Knox Schroeder, 19- knowing the entire time they will die. He inserts himself into the story briefly, for as a child he lived nearby and saw the National Guard protecting his hometown while the Teamsters Union was on strike. It would be some of these guards that were then deployed to Kent State when tensions arose. With the Vietnam War ongoing, students were protesting, as many of the male students had the specter of the draft hanging over them. Background knowledge is worked into the panels, as we learn about how political and social tensions morphed into a crisis because many campus and town leaders operated out of fear and faulty information. Contributing to local tensions were military leaders who were unequipped to handle the volatile environment and meddling government agencies that were adding more issues to the already challenging situation. A powder keg was ready to explode with one wrong move, and there were many made that tragic day.

Backderf’s artwork is very reminiscent of Robert Crumb and of Don Martin from Mad magazine, with an underground comix vibe. It is all drawn in black and white, and while not an attractive art style, it really represents the 70s era and Ohio landscape well. Of all the four books I have read by Derf, this is the one I found the most authentically drawn, for in past books there was a touch of caricature in the people, but here he based his drawings on photographs and videos of the campus students. While there are some text-heavy panels, they are crucial to understanding, and some maps of the day’s events help too.

I applaud the author for pulling together this comprehensive narrative, for he put in the work by interviewing survivors and researching the information that would guide his story, as extensive notes show how his work was led by facts and not conjecture. A heartbreaking author’s note sadly shows how the mistakes made were covered up, and fifty years later no one takes responsibility or accountability for the shootings. Plus, the short epilogue shows the callousness shown by President Nixon, reminds me sadly of some current politicians, and how the American public is still struggling today with certain political issues. This was a truly thought-provoking graphic novel and is well worth a read.