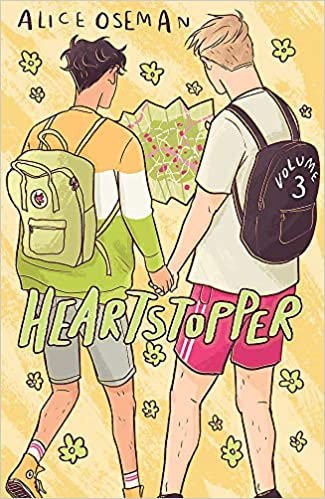 Now that Nick is out as bi to his mom, and Charlie has told his parents that he and Nick are dating, the boys start thinking about telling others as well. They’d like the secret to be out, but they also want to take it slow. Charlie is afraid of Nick getting bullied the way he was. They get a taste of this when Nick’s brother David comes home from uni for the summer holiday. Fortunately, they have the upcoming school trip to Paris to have something to look forward to. Plenty of shenanigans ensue with Nick and Charlie trying to be discreet, and some of their classmates and friends falling for each other in the City of Lights. As Nick and Charlie try to keep their relationship a secret, they discover secrets about each other, too. How much longer can they keep it up?

The more this series goes on, the more the story deepens. While there is plenty of drama (and this volume had a lot with the Paris trip!), it never feels over the top or out of place. New feelings and concepts are introduced organically and not just for the sake of inclusion. For example, Charlie explains his lack of eating as stemming from feeling a lack of control during the period he was outed. This makes sense for his character. It also works at introducing mental health issues and, assuming eating disorders, for young men, which are typically overlooked. If my thinking that Charlie has an ED is correct, I have no doubt that it will be handled as delicately and empathetically as prior issues have been.

This was a pretty easy read to get out of the slump I’ve been in. The font is bigger and though it’s in a handwriting style, it’s never unreadable. The only color throughout the book is a minty green, becoming lighter or darker depending on the mood and/or setting. While the characters and backgrounds are more abstract, emotion is more the point, and it comes across perfectly.

Looking forward to the next volume!