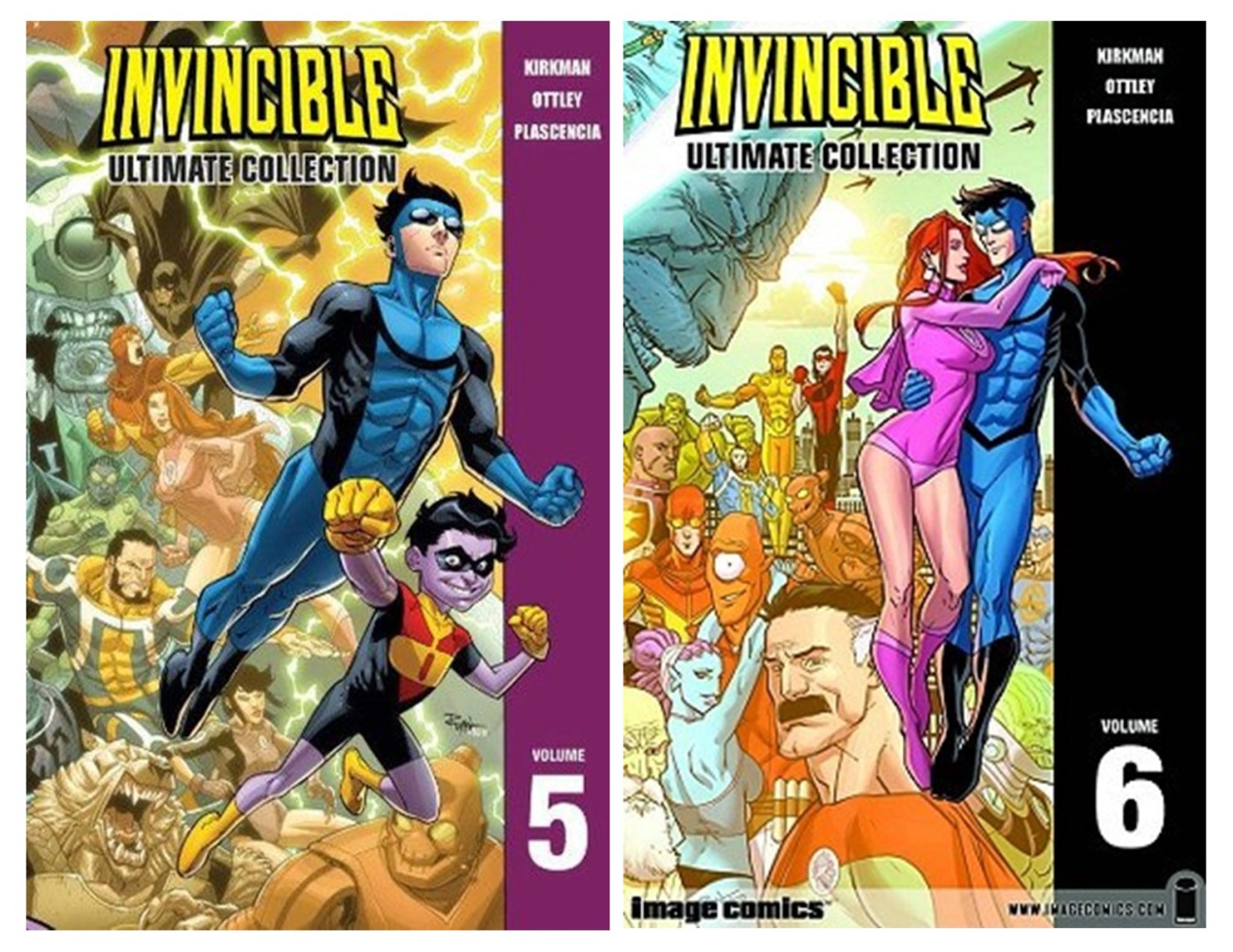 I’m half-way through the entire Invincible series! Mark has proved to be a flawed but very appealing superhero and the action never stops!

This fifth volume has the theme of- who can you trust- as Mark grapples with Cecil Stedman, the leader of the Global Defense Agency. Mark has always followed Cecil’s commands, but Cecil’s use of the Reanimen and the looking past of Darkwing’s murderous past, show that he is morally corrupt. Another example is when Mark teams with the Wolf Man who has been wrongly accused of a crime, and Cecil won’t help out, because he feels he can not gain anything from him like he can from Darkwing. During this time Mark’s younger brother Oliver has acquired his powers and wants to start fighting villains, so Mark steps up to teach him how to utilize them, but Oliver himself makes questionable decisions, as he admits that he is not human and not subject to their morality. A bright spot is his deepening relationship with Eve and that the former Teen Team sides with him as they too realize that Cecil can’t be trusted. And in a parallel story, Allen the Alien and Omni-Man team up to break free of the spaceship they are imprisoned in and a secret is revealed about the Viltrumites. But what is Angstrom Levy planning…

Artist Ryan Ottley has really hit his stride with the illustrations. I liked the costume change (although the yellow was iconic) so he wouldn’t clash with Oliver’s new costume, which paid homage to Robin’s (DC) costume. Loved the 16-panel grid showing Invincible’s look in other multi-universes!

I am now halfway through this series, and it has hit its stride- Mark is no longer a new superhero, instead, he is an established warrior grappling with moral decisions of whether it is right to kill a villain or not. Levy sends dozens of Invincibles from other dimensions to attack Mark and the entire globe so every single Image hero is called into action to combat them. Two important heroes make the ultimate sacrifice to fight them, and cities across the world are left in ruins with millions of innocent bystanders killed during these battles. If that’s not bad enough, the Viltrumite Empire sends one of their deadliest soldiers, Conquest, after Mark. Their fight was excessively long and bloody. In another part of the universe Allen and Omni-Man team together after their escape and make plans to prepare weapons and allies for the impending war with the Viltrumites who want to take over Earth and breed with them to strengthen their dwindling numbers. In the aftermath of the two earlier battles the little pink aliens from Mars are planning their own conquest- poor Earth is just always under siege!

The illustrations style shifted a bit in the last half of the book, as original artist Walker drew parts of the story, but I have to admit I much prefer Ottley’s work now. Walker’s Omni Man and Eve’s faces were especially different and not to my liking. This series pulls together so many different plot threads and themes- it can be a bit much. It can veer between gore, campy fun and poignant emotional moments in just a few pages or even panels, giving me whiplash sometimes. Nevertheless, this first half of the series has been a romp and I look forward to the last half.