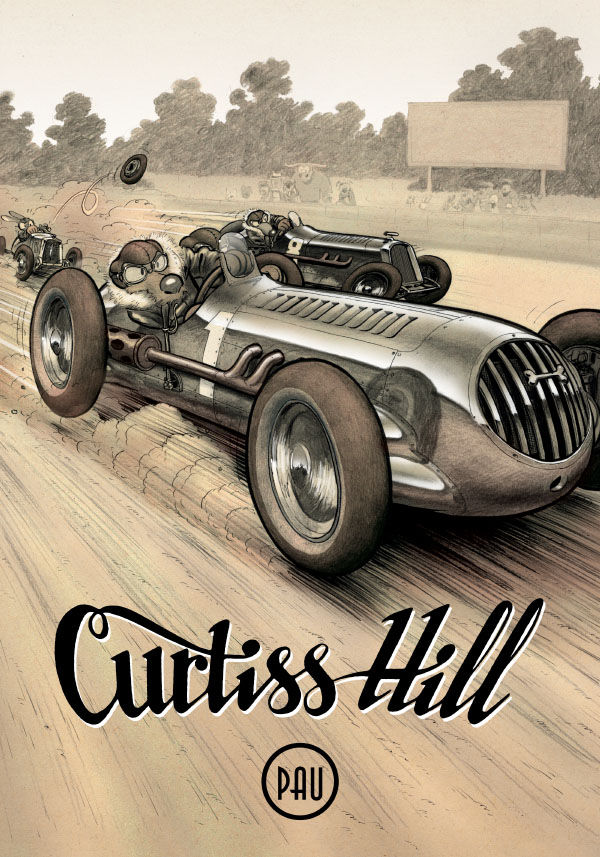 Curtiss Hill is a dog, and a famous racecar driver. The 500 Miles of Escápula is coming up, so Curtiss goes to ask his mechanic Dino to build him a brand new engine – only to find that Dino’s disappeared. Could he have gone off to the war in Kalkany? As if Curtiss didn’t have enough to deal with, what with his racing rival Rowlf Zeichner trying to cheat his way to the top. Journalist Maugène Berk decides to interview them both for a piece – and discovers something shocking about each dog.

Don’t let the Disney-esque animal characters fool you. This is an adult graphic novel. There are multiple instances of and references to sex, drugs, and strong language. Much like the main theme of the story – that appearances are deceiving – the art is totally incongruous with the weight of the story that’s being told. Curtiss and Rowlf are two sides of the same coin, in ways that will surprise you.

The setting was deliberate. The character’s clothing, the cars, the war, and their language and mannerisms suggest that this story takes place in the 1920’s or ’30s. Adding to the immersion is the totally sepia color palette and the art style overall evoking early Disney cartoons and comic strips.

What’s right, wrong, or fair in love, war, and racing? The ending is left open so each reader can decide for themselves.