Based on the gruesome 1933 double-murder in Le Mans, France, this story details how two sisters killed their employers and their crime might have had roots in the class struggle of that time period.

Christine and Léa Papin were two very close sisters who came from a poor family and had been sent to be live-in maids to help support their mother. Christine had been working for the Lancelin family first and asked for her sister Léa to be hired to help with the heavy workload and long days. The mother and younger daughter condescend to the sisters and eventually work up to abuse. Christine and Léa bond together, and there are some uncomfortable hints of a sexual relationship between the two, but eventually, they reach a point where they won’t put up with the two women any longer.

Author and illustrator Katie Skelly has a distinctive cartoony art style, that is replicated in her other graphic novels- simple lines that give the impression of the scene without drawing extraneous detail. Backgrounds are minimal, often with blocks of monochromatic color. The panels are streamlined, often only three to five per page with white gutters. I would like to comment on the noses- I am seeing more and more artists who simply draw a few lines to symbolize noses (Noelle Stevenson, Fran Krause) that are minimalist and somewhat off-putting.

This was a fast and interesting read, and people might not realize until the end that it is based on a real crime. The pacing of the first two-thirds of the story was excellent, with flashbacks to the sister’s past, but their final breaking point came suddenly. The ending was abrupt and almost too light-hearted to be non-fiction, so readers might come away thinking it is simply a fantasy horror story. To learn more about the real-life Papin sisters, start with this Wikipedia article. But all in all, a solid graphic novel that might push readers to think about the exploitation of workers and how stress and bias can break people. 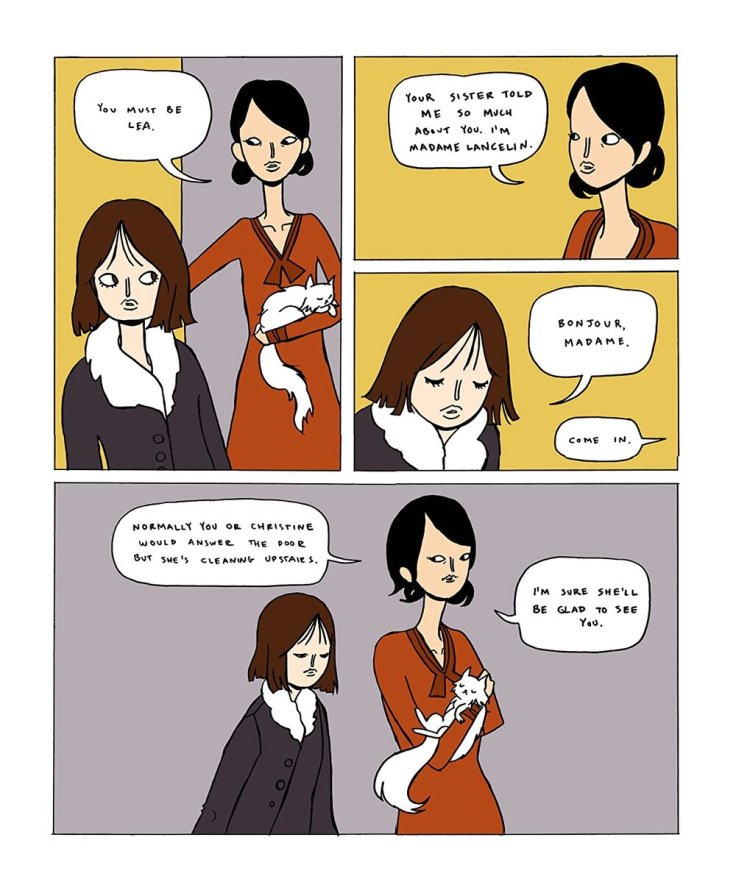