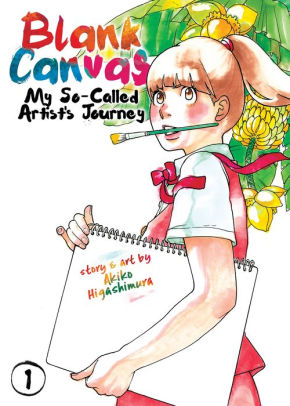 Akiko Higashimura, manga artist best known for her work on Princess Jellyfish, shares the beginnings of her artist’s journey in the first volume of this manga memoir. She starts her story during high school, where we see her big dreams and ambitions of being a shojo (young adult romance) manga artist! … But her not-so-good grades. Still, Akiko loves to draw, thinks herself pretty good at it, and is sure she can get into art school on talent alone. That is, until her friend Futami reminds her that it’ll take more work than that, as Japan’s college applications are very competitive and demanding. She invites Akiko to come to an art class with her, taught by an independent teacher named Hidaka Kenzou. Akiko quickly learns that Hidaka-sensei is VERY demanding, even harsh. Can she put up with him long enough to take her college exams and get into art school?

I found this memoir very refreshing for a couple of reasons. First, it seems I am becoming a bit more open-minded to manga after all =) It’s always touching to see creators publish personal memoirs in the format they are most familiar with; it makes the story feel more immediate and intimate. Though the art is a little more realistic and less in the stylized manga style, visual tropes of manga (angry veins, sweat drops, sparkling backgrounds) are still found.

Second, and maybe most important to me, this manga shows how HARD it is to be an artist! It’s hard work! Akiko shows us this through her schedule with Hidaka, his insistence that they keep a log of the time they spend on each drawing, as well as her own character development. As a teenager, she thought she could coast by on talent, but it takes significant time and effort to hone her craft, which is 100% the case, against many assumptions people have of art and artists. As an artist myself, reading this gave me vivid flashbacks of undergrad: long hours sitting or standing in the same spot in the studio, hauling art supplies and projects up 3-4 flights of stairs, nursing various aches and pains in my dorm afterwards. The result? I’m a much better artist than I was before.

I got the impression that this manga is just as much an ode to Hidaka as it is documenting Akiko’s journey. They have an interesting relationship. Though Hidaka is harsh, he is honest and a realist, which tempers Akiko’s teenage idealism and arrogance. She obviously looks back on him with admiration and fondness. I’m fascinated to see how their journey together unfolds.

One thought on “Blank Canvas: My So-Called Artist’s Journey (Vol. 1)”