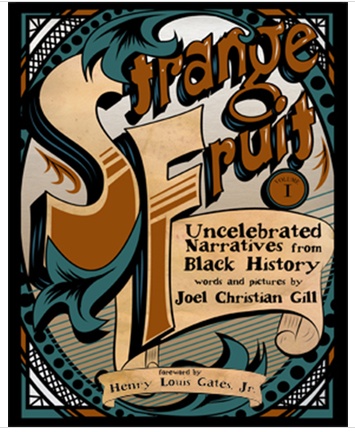 Author and illustrator Joel Christian Gill shares nine short stories of blacks from American history that you are probably not aware of. His title refers to the song made famous by Billie Holiday about blacks being lynched and hanging from trees, so the title immediately signifies the seriousness of the narrative. Gill’s opening message “For all those who freed themselves by cutting the rope” further amplifies this message.

Out of the Box Thinking: Henry “Box” Brown- Slave Henry Brown was desperate to escape slavery, so with help, he hid in a box and was shipped to freedom in a daring and unique way in 1849.

Richard Potter’s Great Illusion- Potter was a famous magician, who toured worldwide, but only revealed on his deathbed his origins.

Theophilus Thompson: From Slave to Chess Master- Thompson proved that blacks are intelligent as whites when he became a master of chess and won many championships. That he disappeared at the peak of his career points to the theory that he was killed by those who felt threatened by what he represented.

The Shame- In the late 1800s a small modest seaside village was established on Malaga Island by a mixed-race community that had been founded by a freed slave years ago. But in 1912 the nearby white community decided that the Malaga village had to go and swept in and destroyed the village, sending many of the inhabitants to the Maine School for the Feeble-Minded. The judgments that the whites passed on the community were shameful and is a stain on Maine history.

The Noyes Academy- An elderly black gentleman shares his story of studying to be a minister as a young man at the Noyes Academy in New Hampshire. But in 1835 the academy was destroyed by whites who opposed that the school was racially integrated.

Marshall “Major” Taylor: The Black Cyclone- Taylor was an amazing athlete, especially known for his cycling triumphs. Unfortunately, as he aged he lost his money and died in obscurity.

Two Letters, As Written by Spottswood Rice- Rice was an escaped slave who fought for the North, and was determined to free his daughter from his former master. The juxtaposition of the two letters poignantly showed his deep love for his child, and his determination to be reunited with her.

Bass Reeves: Lawman- Reeves was a former slave who had moved west after the Civil War. He later became a respected lawman who was known for his shooting skills and morality in bringing in fugitives from justice.

Gill’s illustrations are very cartoony, which I felt did not mesh with the seriousness of the stories. He used an earthen color palette and a standard panel layout, with an attempt to recreate the era of each story.  His tone and storytelling began to improve with the later tales, and he used large black birds effectively to symbolize Jim Crow in the last few stories. Despite my not being a fan of the illustration style, I did find the stories interesting for they certainly highlighted individuals that most people will not have heard of before. I think this book could be effectively used in classrooms with middle school and high school students. I was pleased to read this story for this month’s book selection from I Read Comic Books and I will check out volume two that came out a few years after this graphic novel. I feel it is important to know more about black history than the little that is found in history books and who whites feel are deemed worthy.