I’m freaking out for the fourth time! I like this post idea, as it forces me to reflect on my reading halfway through the year instead of just at the end when Kathleen and I do our Best Of list. I had fun going through my Goodreads data, and bonus, it highlights the other genres I read since I read way more than just graphic novels.

While Shirley Jackson’s short story The Lottery is her most well known, the anthology The Lottery and Other Stories, proves that she was a master of the short story, for the entire collection was strong. These stories are reminiscent of other great writers of the era like Raymond Carver and John Cheever, however, Jackson authentically showcases the female perspective to great effect. Released in 1949, these stories are a snapshot of an earlier time when life was supposed to be rosy and perfect, although it often was anything but, especially for women. The stories are a fascinating mix of genres that included realism, horror and surrealism, but all with a biting wit and attention to human nature

I’m counting the Hunger Games prequel as my sequel since it came out so many years after the original trilogy. The Ballad of Songbirds and Snakes gave an origin story to President Snow and shows how a callow but sympathetic youth started his descent into an evil tyrant. It was a solid entry into the Panem universe and effectively showed how the Hunger Games mutated into the games that Katniss would be forced into years later.

I loved the audiobook World War Z by Max Brooks, and he recently came out with a new book Devolution: A Firsthand Account of the Rainier Sasquatch Massacre. From zombies to Sasquatch? Gimmie!

I want Volume Ten of Saga released! In fact, no one has any idea when the next volume will come out, as fans have been waiting anxiously since 2018 after a heartbreaking last page in Volume Nine.

How I struggled with The Amazing Adventures of Kavalier and Clay! A few years ago this book was highly recommended to me by a co-worker who loved it and thought I’d connect with the two main characters who are creators of a famed comic book series. At 600+ pages, I choose to listen to it on audio but after listening to half of the discs, I set it aside and listened to two other audiobooks before coming back to it and finishing it. By the end, I was in such an apoplectic rage that I could not comprehend why it won the Pulitzer Prize for Fiction. Read my Goodreads review to find out why.

As much as I hated The Amazing Adventures of Kavalier and Clay,  I was intrigued enough by the fictional comic book hero to find this metafiction graphic novel about the Escapist, The Amazing Adventures of the Escapist. To continue the charade that Kavalier and Clay were real men this parody recreates the supposed decades-long publishing history of the character, starting in the Golden Age of Comics. This companion book is a homage to the comics of past eras and showcases The Escapist (plus Luna Moth) in many different styles and moves forward chronologically to how comics are typically drawn today. 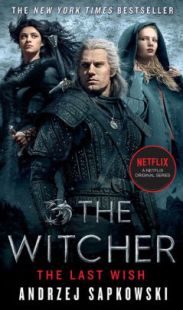 Geralt the Witcher from The Last Wish. I started the Netflix series and loved Henry Cavill’s portrayal of Geralt. I stopped mid-way into the show, so I could read this collection of short stories that many of the episodes were based off. Cavill with long blonde hair is so flippin’ dreamy.

Favorite book to film adaptation you saw this year

I don’t see many movies in the theatre, and am stumped for any I saw this year before the pandemic hit and theatres closed. But I am very much looking forward to seeing Wonder Woman!

Erica Slaughter, who comes to Archer’s Peak ready to kill the monster on hand, from Something Is Killing The Children.  This Goth looking Buffy The Vampire Slayer interviews a survivor and heads into the woods to kick some ass. She has the potential to be an intriguing character, so I am looking forward to Volume Two to see if I still find her appealing.

Favorite new author (Debut or new to you)

I’m tweaking this, as I’ve been a fan of this author for years, but I read two of his novels and a non-fiction book he contributed to in the last year, and I just love him. Silas House writes about contemporary Appalachia in such a respectful and loving manner and I just really enjoy his voice.

Book(s) that made you happy 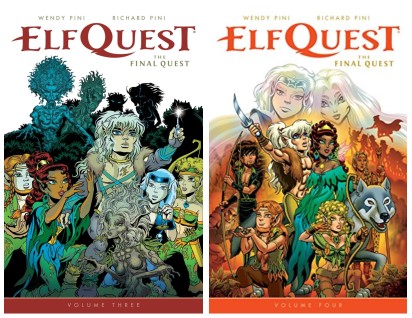 I have been a huge fan of the ElfQuest series for 25+ years, and in 2018 the series drew to a close. I read the four-volume arc but never reviewed them, so during our endless quarantine time at home I re-read them so I could write my reviews. I enjoyed immersing myself in the Wolfrider universe again!

Book(s) that made you sad

Same ElfQuest books as above. It was melancholy to reach the end of a series that has been going for 40 years!

Favorite review you have written this year

For the second year in a row, Kathleen and I participated in a Fiction’s Fearless Females series, and this year I choose Sarah Connor from the Terminator franchise. The recurring theme of No Fate weaves in and out of the franchise, and Sarah’s courage and empathy are the pillars for her willingness to continue fighting even when the future looks hopeless. How Sarah dealt with the hand she was given as her entire life crumbled away unexpectedly, can be a lesson to us all in how to fearlessly face our uncertain future.  Not only did Sarah fight for her son, but she continued to be ever vigilant in helping others, for she never ever gave up.

In The Pines by Erik Kriek was a unique graphic novel in which the art was in duotone, with a different color for each tale. Reminiscent of scratch art or wood reliefs, Kriek’s black inks were evocative of Appalachian landscapes and times gone by. Most likely going to be on my Best Of list at the end of the year.

Joe Hill, the author of Locke & Key, has a set of graphic novels coming out later this year called Hill House Comics. While not all written by him, they are all horror-themed and look awesome. I’m looking forward to reading this new series.

I gave myself a goal to read 120 books this year on the Goodreads Challange and so far I am at 79, although that does include some short stories from LeVar Burton Reads. I have some good books in my TBR pile and look forward to future happy hours of reading or listening to books!