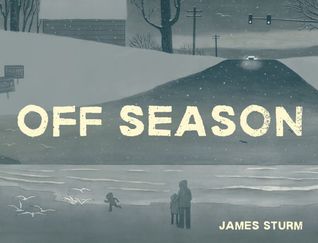 Off Season is a book of its time, detailing the inner life of a working-class man with a crumbling marriage during the election season that put Trump in the White House. Despite the characters being anthropomorphic, Mark and his concerns were so very human.

Mark and his wife are separated, with Mark struggling as a building contractor, as his main client can’t or won’t pay him. He is barely covering the bills, compared to his wife who stays in the family home and is buffered by family money. His two children play him off Lisa, especially his bratty daughter, and he struggles with being consistent with them. Somewhat estranged from his brother and his parents, Mark tries to reconnect with his parents, to discover his mother has cancer.

Surprisingly poignant, this story of a disintegrating marriage was very real and at times raw. I’ve always been the type to wonder about other people’s lives, as Facebook and Instagram tend to paint people as perfect and always happy. You never know what is going on behind closed doors, and this graphic novel shows both the messiness and the sweetness of family life. Mark is grappling with his role as a father, son and husband in the new reality of Trump’s America, and while some of his choices are not wise, you can’t help but root for him.

The ending is odd, and while there is a nugget of hope that Mark and Lisa’s marriage might be saved, the way in which they do so was off-putting to me. I had to restrain myself from being too judgy, as my own marriage is solid, but other marriages might need to find ways to make it work in ways that I could not envision myself. However, despite me not connecting with the ending, it somehow worked for the tone of this book.

Every page contains two panels done in greyscale. I think this simple panel construction suits the story well- straight forward and to the point. The pacing was well done, with several vignettes of family life that pulled at my heartstrings. At first, I wondered why the characters were portrayed as dogs, but the somewhat simply drawn portrayals let you connect with the character-driven story without extraneous details. This story of a family during an unsettling cultural moment was very well done and will make you reflect on your own family during off-season times in your life.