The Midwinter Witch (The Witch Boy #3) 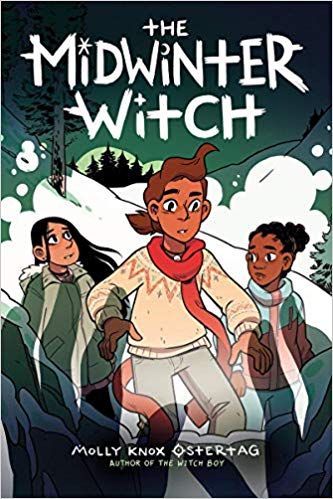 Aster is a boy who practices the traditionally feminine witch magic. He hopes to compete in the Vanissen’s (very) extended family’s Jolrun tournament at their annual Midwinter Festival. He isn’t afraid to show who he is, but others in his family are afraid and even angry at him for trying. Ariel is a girl without a family, who has been somewhat taken in by the Vanissens due to her magical abilities. She is still uncomfortable with the prospect of so much family all of a sudden, and isn’t sure whether or not she’d like to attend the Midwinter Festival. She’s also been having strange dreams in which a mysterious witch appears, claiming to know more about Ariel’s past. How can Aster and Ariel fit in with their family and stay true to themselves at the same time?

I felt very… confused by this story. As in, I felt I was coming in at the middle of a bigger story. One of my co-workers informed me that this book is the third in The Witch Boy series, which explains why I felt that way! I hadn’t realized it was part of a series, or I’d have started at the beginning. Though I had to fill in some plot holes myself, not having read the first 2 books, I was able to follow along well enough.

Aster’s story was the most compelling, even if it felt like Ariel was supposed to be the main character. Aster and Ariel shared the stage about half the time, but Ariel had slightly more “screen” time. Unfortunately, I was much less interested in her story of trying to find her family, than with Aster’s struggle to break traditional gender norms. In this universe, witch magic is traditionally performed by women, and shapeshifting by men. Aster’s choice to study witch magic is unprecedented – and it shows. He is to some extent worried about what the rest of his family will think, but he doesn’t let it stop him. Others, who are afraid for him, afraid of him, and angry at him for not being “normal” are the ones who try to get in his way.

There are more characters who are representative of minority races and the LGBTQ+ spectrum. In my opinion, all of them were more interesting than Ariel. Perhaps I need to read the first two books to see where and how she came in, and what her overall significance is to the bigger story, but compared to Aster’s struggle, her well-tread journey seems, well, dull. I would rather her not have been in the book at all.

Because this is a middle-grade novel, the art is soft and skews to a cute aesthetic. The figures are rounded and expressive in a cartoony way. The backgrounds are soft and not too interesting, to keep the focus on the characters. All the colors are vivid and bright.

Overall this story was bogged down by Ariel’s character and inner journey. While there is certainly nothing wrong with it, she paled in comparison to Aster’s fight to break gender norms within his family. Middle-grade readers will appreciate the easily accessible art and the wealth of normalized representation.

5 thoughts on “The Midwinter Witch (The Witch Boy #3)”