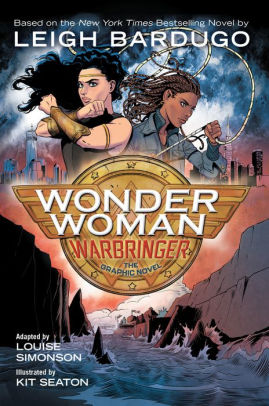 Before she was Wonder Woman, Diana grew up on Themyscira. It isn’t always easy being the youngest of an entire island full of warrior women. They were reborn as Amazons because they died nobly, with a goddess’ prayer on their lips – every single one of them except for Diana. Some call her Pyxis (clay pot), some say she’s made of mud. Diana is determined to prove her right to be among them during an annual race across the island. Along her route, Diana witnesses a shipwreck and rescues a girl about her age from the wreckage. Her name is Alia, and with her coming strange and terrible things start happening on the island. The girls discover Alia is a descendant of Helen of Troy, whose blood was cursed to make her a Warbringer: a harbinger of death and destruction. Diana removes Alia from the island to try and find a way to remove the curse. If it fails, Alia asks Diana to kill her instead, before she can start another World War. Killing another is against the Amazon code. Can Diana remove Alia’s curse, or will she be forced to do the unthinkable?

This is a graphic novel adaptation of Leigh Bardugo’s YA novel (the first in the “DC Icons” series) that came out in 2017. At the heart of the story is the moral dilemma that Diana faces: is it better to spare one life yet potentially cause countless other deaths, or better to take one life to spare countless other lives?

I was appreciative of the Amazon’s origin here, as it was written first in George Perez’ run. Myths and deities other than Grecian are included as a result, though the focus is on Grecian myths primarily.

It being a YA novel, there was a romance between Diana and another character that to me seemed forced. There are representations of people of color – Alia herself is African American, which contributes to the story in multiple ways – and LGBTQ+ characters. Wonder Woman’s character is tolerant and accepting of all kinds of people, so I was thrilled to see many types of representation here – where it’s right at home!

Differing hues of sea blues and greens dominate the book. Other colors such as red and yellow are used as highlights. Decisive and precise lines accentuate the characters’ strength and determination. Though there is a lot going on sometimes, especially in the action scenes, the panels are never cluttered.

This is an impressive adaptation of the best-selling YA novel. The dilemma young Diana, and her diverse companions, face compels readers to keep going until the very end.