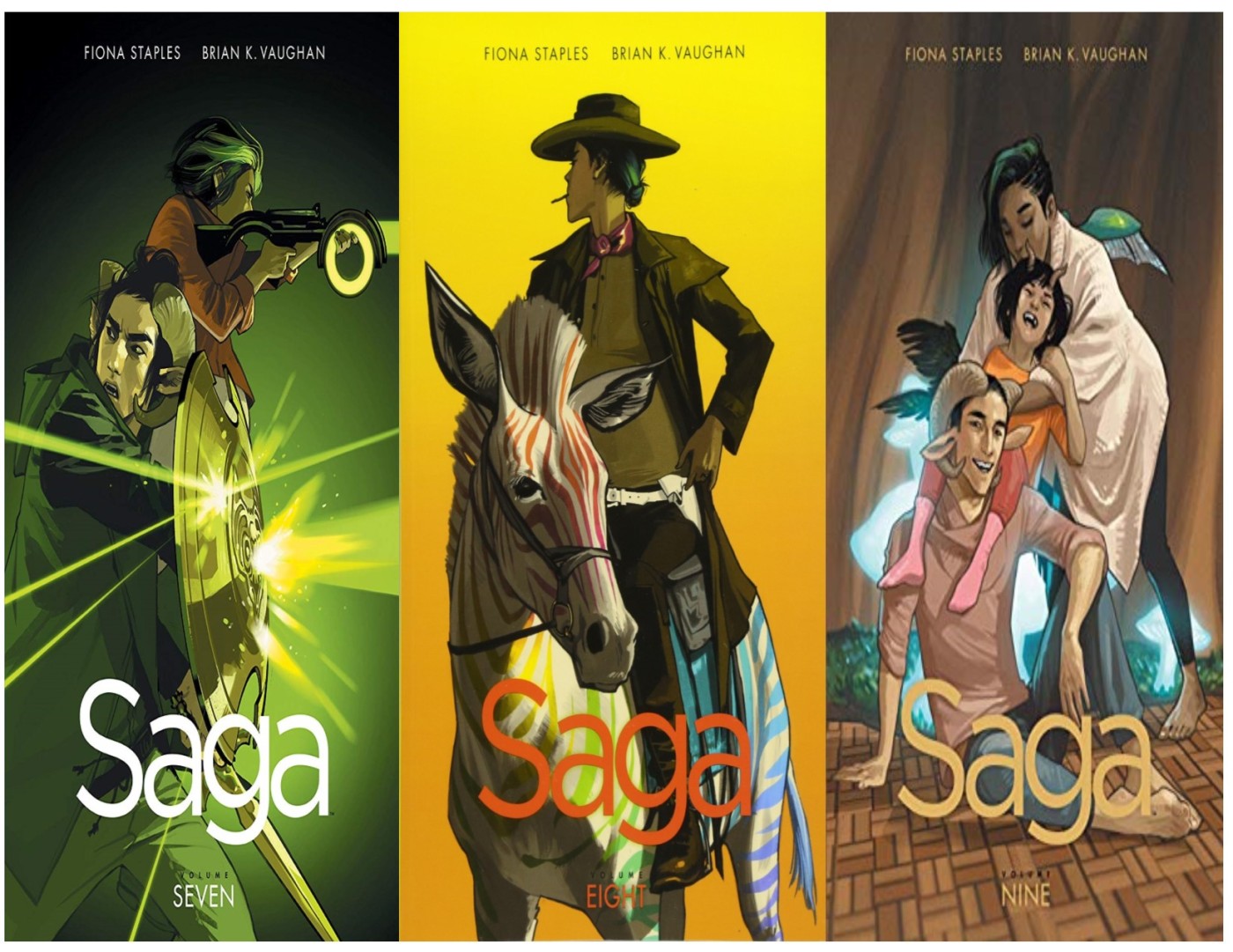 Here concludes my Saga saga (for now!) as volume nine came out in 2018 and author Brian K Vaughn and illustrator Fiona Staples took a hiatus from putting out new volumes until an undetermined future time. A quote from the series to set the stage: “Anyone can kill you, but it takes someone you know to really HURT you. It takes someone you love to break your heart” -Hazel

Hazel has been reunited with her parents and they couldn’t be happier, especially as they are also expecting another child. A former prisoner, transgender Petrichor, has joined the family, as she slipped through the portal when Klara chooses to remain in the detention center with her new loved ones. Along with Izabel and the Prince Robot, the group needs to refuel their spaceship and their brief sojourn to the planet Phang ends up lasting for six months. The Will tracks down Gwendolyn and Sophie, but Sophie and Lying Cat remain with Gwen, despite The Will’s plea to join him. War comes to Phang and the family needs to leave quickly, leaving behind some friends they had made, and Alana gets hurt during their sudden departure.

This volume was HARD to read. Known as a controversial series, I have to admit the opening page was a gut punch and it shocked and disturbed me. While I am 100% pro-choice, the picture seemed flippant, but of course, as you read on the narrative was nuanced and I hope it pushed readers to think critically about their beliefs.

This story had a lot of character development as it took a brief break from action (although of course there is some) for Alana, Marko, Petrichor, Prince Robot and The Will. Even little Hazel gets some poignant scenes with her ghostly brother. The volume ends a sweet note, but I know what that means- we are being lulled into complacency so we can be devastated in the next volume.

Groups are converging for a show-down, as the lull in the action in the last volume was just setting the stage for this narrative. While some families have been reunited, and some couples are deepening their connections, other characters are so caught up in their hate that they can’t see the humanity in others. I felt like I was watching a horror movie, and wanted to yell at some of the characters to not do that, go there, or trust that person. And I was right- as there were additional deaths and betrayals. Then there was that ending- NO!!!!!!!

Now, I join all other Saga fans who are waiting and waiting and waiting for volume ten. With such a cliff-hanger it is almost cruel for Vaughan and Staples to make us wait so long. I read that they consider the series halfway done, so we are to expect another nine volumes in the future- but when will it start up again????

To wrap up, I noticed on these three volumes that artist Fiona Staples was given first credit, and I applaud that because in graphic novels it is often the ART that makes the story. Staples’ visuals are top-notch and while Vaughn’s storytelling is superb, it would not be the same story if not for the illustrations (I feel the same way about Locke & Key). I now impatiently wait for Saga to continue, as I wipe away my tears from the heartbreaking last page.