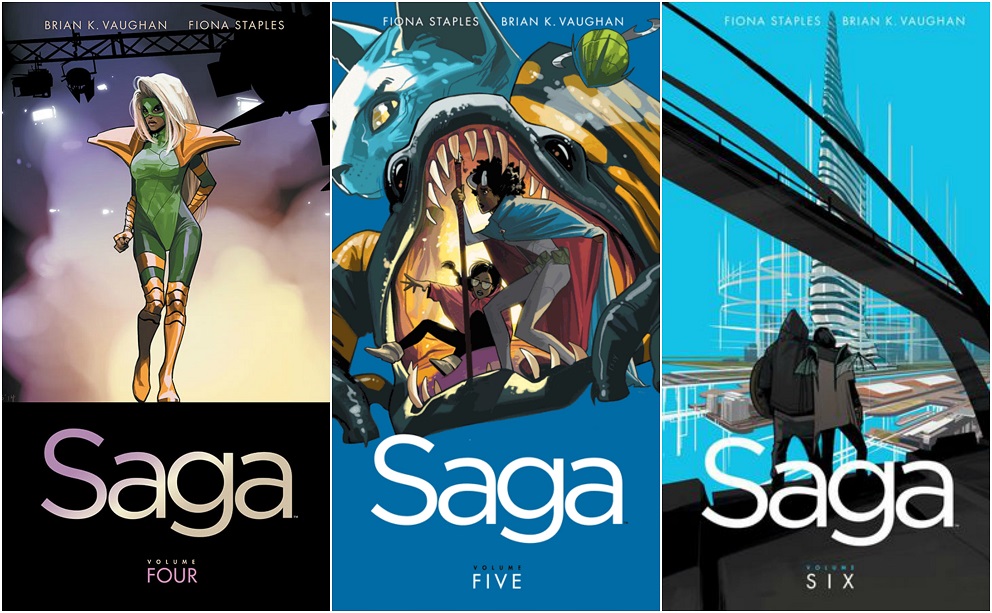 After taking two years between reading the first epic volume and then volumes two and three, I decided I will take a page out of how I read Harrow County and read and review the entire series (thus far) in close succession. *Some Spoilers Ahead*

Marko and Alana are hiding in plain sight while raising Hazel to toddlerhood on a remote planet Gardenia. Alana has improbably become an actress for a soap-opera type series called Open Circuit, leaving Marko and his mother to the day-to-day parenthood duties.  While the family might be disguised, they are taking incredible risks, and can’t risk making friends who might discover their secret. The luster is off their marriage, both parents are stressed, and they find out some of their choices have dire consequences. Prince Robot IV misses the birth of his son, and because of his oversight, the baby is kidnapped by a disgruntled janitor robot who feels the royal house has taken advantage of the populace during the war. When the kidnapper also grabs Hazel, the two feuding fathers need to band together to find their children before its too late.

All the various groups are separated- Alana and Klara are trying desperately to escape from Dengo the janitor who is holding Hazel and the baby robot hostage, Marko and Prince Robot IV are trying to find their children, plus The Brand, Gwendolyn and Sophie are trying to find an elixir to heal The Will. The Last Revolution, a radical anti-war group, gets added into the mix with shifting alliances and betrayals that lead to the death of several characters. While there are family members reunited, other family groups remain splintered.

I love how the character’s motivations are layered and deep, and not everyone makes the best decisions. Some people start with the best of intentions and then make cowardly decisions, and on the flip side, some weak characters end up standing up strong when needed.

Time has gone by and Hazel is now kindergarten age as she and her grandmother are being held in a Landfallian detention center. Marko and Alana are finally reunited and determined to find Hazel and Klara so they blackmail a certain someone to help them onto the Landfall prison. The Will has made a recovery but no longer has his sidekick Lying Cat, instead, he has his sister’s dog-like creature, Sweet Boy. He has become heavy and mean, and hallucinates frequently. Meanwhile Hazel and Klara have made the best of their detention and both have acquired some allies who help them when Marko and Hazel make their brazen rescue attempt. Nothing ever goes perfectly, and the family’s reunion is bittersweet.

Wow, although I had a slow start with this series, the storytelling keeps amping up and I am now devouring the volumes. Staple’s art remains strong, with additional crazy aliens and planets, yet it all remains relatable. Expect reviews for the next three volumes to drop next week!