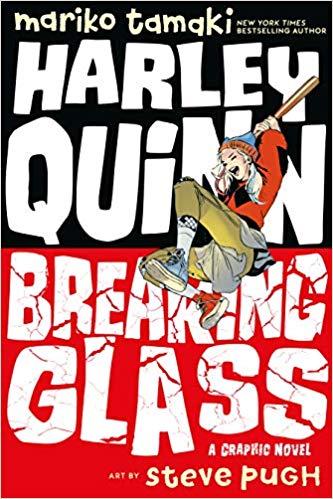 Harleen Quinzel has a measly $5 in her pocket when she gets off the bus at Gotham City. Her mother has sent her to live with her grandmother for a while. To Harleen’s chagrin, she finds her grandmother has passed away, but Mama, the current tenant of her apartment, gladly takes in the eccentric teenager. Harleen’s spirits are not dampened by this turn of events; she embraces Mama and his cohort of drag queens just as enthusiastically as they’ve embraced her. However, big changes are coming to the neighborhood. The Kane family, who owns Millennium Enterprises, are looking to buy out the block to build upscale condos and “improve” the area. Harleen faces a difficult choice. Should she organize community protests with her new friend Ivy and her family? Or should she burn the corporation down with the mysterious Joker?

I have to say, this one surprised me. I’m not a Harley Quinn fan, but DC Ink has put out some fine stories, so I decided to check it out. This reimagining of Harley’s origin story will be hard to top.

Harley’s distinctive voice and character lent particular weight to the themes in this story: African-American and LGBTQ+ rights, gentrification, and poverty. As it’s written from Harley’s point of view, her colorful and optimistic speech firmly place us in her head. We see from the art more than hear from Harley about the injustice that happens in the world around her, showing the audience that while you can hide from problems in your head, you can’t escape the real-world causes and consequences. Harley ultimately has a choice: whether or not to see the problems, and how to respond to them. Is there a right or wrong way to fight for justice?

The art is phenomenal. In both an homage to and deviation from your typical Batman, Gotham-style book, it’s rendered in cool sepia. Pops of color come through at critical moments or in flashbacks: Harley red, Joker yellow and purple, hot pink. It feels like reading an old black and white film where someone expertly colored over the reel in the most emotionally charged moments. There are a few Easter eggs and homages to Harley’s history sprinkled throughout that both old and new fans will enjoy.

The question Harley faces here, how to respond to injustice and what the right way is to fight for justice, is something many teens can relate to. The timely, yet timeless, message and stellar art make for a Harley origin story that will be hard to beat in the future.