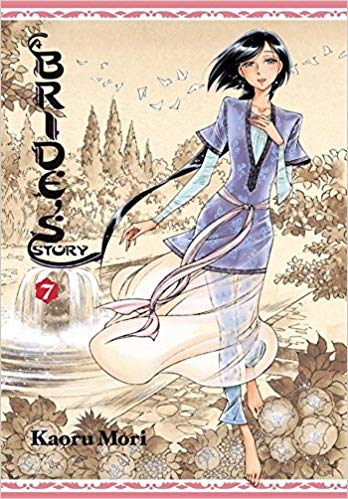 We follow Mr. Smith once again in this volume, as his travels take him to the home of a wealthy merchant in Persia. Though the merchant has a wife named Anis, it’s customary for the brides of Persia to never show their faces to men outside the family, so they never meet. However, Mr. Smith learns much about Persian culture and customs for his research, and Anis learns much about Mr. Smith and England from her husband. Though Anis has a child, and is very happy with married life, she is lonely and desires female companionship. Mahfu, her child’s nurse, suggests Anis accompany her to the women’s public baths, so she might meet other women. There Anis meets Sherine, a woman who reminds her of a cat: beautiful and aloof, but still a warm person underneath. They immediately hit it off, prompting Anis to ask Sherine to become her avowed sister. Will Sherine accept?

Mori goes into a little more detail about avowed sisters in the epilogue to this volume. Apparently, avowed sisters were a custom among Persian women somewhere between the seventeenth and nineteenth centuries. It was almost like a marriage, but between two women. They usually spent a year in each other’s company before one asked the other to be her avowed sister. Upon accepting the offer, a ceremony was performed in front of many witnesses, wherein the two women swore to be devoted friends for life.

I thought that was wonderful! I loved this volume because it highlighted the close friendships women can form with each other! It’s so important to see friends love each other so deeply and be able to express that love for one another! Plus, I learned something new, which is always exciting! XD

The extraordinary detail usually found in Mori’s artwork was a bit toned down for this volume. Much of the story takes place in the women’s baths, as Anis and Sherine get to know each other, so the backgrounds are hazy and steamy without much detail. There is a much higher level of nudity in this volume because of the setting, but it’s never inappropriate.

There is a short story at the end of this volume that takes place between Karluk’s parents. It’s the cherry on top of an already sweet volume. This latest installment may have given me diabetes!!! I’ll see you all in the new year if I survive this sugar rush ;D