Star Wars: The Rise of Skywalker

I hope everyone had the happiest of holidays! My gift for you readers out there are my thoughts about the most recent Star Wars movie! 😉

In the last week, I have read so many thoughtful reflections on the movie, so I will post my observations as character studies as I have in past movies, such as I did in Captain Marvel and Solo. While overall my viewing experience was mostly positive, my thoughts go far beyond what I can share in character reflections, but hopefully, enough is shared for readers to understand my conflicted thoughts on this movie.

Let’s start with the droids: C-3PO, BB-8, R2-D2  and D-O (not pictured).  No Star Wars movie is complete without an adorable or wisecracking droid. In this movie, C-3PO gets a featured role as being able to interpret a needed Sith artifact to find a hidden planet, but his sacrifice of giving up his memories is undone by D-O’s intel. Thus, his whole storyline ended up being filler, when other plot points could have been developed further. Still, it is always good to see these droids as part of the action!

Star Wars did Rose dirty! Obviously, they listened to some toxic fans who didn’t like her possible romance with Finn, and cut her role down to a bare minimum. She was left on the Rebel Base the entire time with little to do and no character development. She deserved more (plus, she almost didn’t get a character poster- this one was released after the rest)! For a thoughtful in-depth analysis of how Rose’s character was treated, read Jeff’s post The (Mis) Use of Rose Tico on The Imperial Talker site.

So instead we got a new character shoved down our throats- Jannah. She is an ex-Stormtrooper, who along with other trooper deserters gets sucked into the action. She is paired with Finn (instead of Rose!) in the last battles because obviously Finn always needs some sort of female side-kick in every movie. While I do think she was kinda cool, it took away from Rose, and what was the deal with her conversation with Lando in the last scene???

Zorii is a rebel in a Boba Fett type costume that is from Poe’s past and plays a part in helping Rey, Finn and Poe get some needed information from C-3PO’s memory banks (which later proved to be a waste of time). I love actress Keri Russell who played her and was relieved when she lowered her face mask at one time to see some of her face. I liked the moment in the end when she didn’t automatically get swept up in Poe’s arms for a finale kiss (how very woke) but a bit of romance in this film would have also been welcome.

I’m throwing General Hux in here, although he did not receive an official movie poster. I always liked Hux’s scenes in all the movies, as he always came off as a petulant child, which I found amusing. So when he was revealed as the spy, I was thrilled as he helped Rey, Finn and Poe escape. However his true motivation was not in helping them, it was to screw over Kylo Ren who had disrespected him in front of others. Hux was not redeemed, as many people stay bitter and angry at the end, and I found that angle more realistic.

Chewie- the one surviving character that was in all three of the original Star Wars movies! I laughed when he received the medal that he should have received in A New Hope– there was finally #JusticeForChewie! I do wish he had received more character development in this recent set of three movies, as he was an integral part of the rebel alliance and he should have interacted more with Han, Luke and Leia. At least he was reunited with Lando for some fun adventure in this film.

Thank you for bringing back Lando! This rebel general still wears his capes with aplomb, and he was a needed legacy character to balance what little they did with Han, Luke and Leia. With Carrie Fisher’s death and the fact that Han and Luke’s characters were dead, this fan-favorite helped bring that chapter to a close. But is Lando’s story over? The clunky dialogue with Jannah at the end seemed to point to Disney having more adventures planned for this scoundrel.

I believe that Finn is force-sensitive. Is this what he was planning to say to Rey, or did he want to declare his love to her? Finn always seemed to be connected to a female in the three movies, first Rey, then Rose (did he ghost her?) and finally Jannah. There was always romantic tension with him and these three ladies, and let’s not forget his bro-mance with Poe! There were many fans who were clamoring for a relationship to develop between the men but frankly, Disney would never be brave enough to do that, instead, they had two females kiss in the last scene between characters we barely knew. Finn was my favorite of the new characters, his good nature and loyalty won me over. 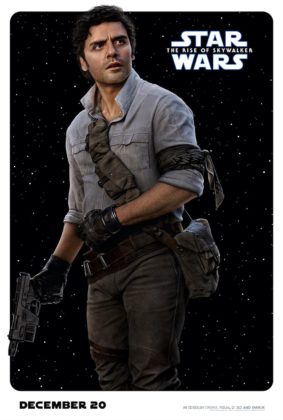 Poe was first written as a Han-type, a pilot who could be a bit morally ambiguous but have the classic heart of gold. His leadership progressed in this film, and I finally truly saw him as a leader of the resistance, and someone who deserved the title of General. While Oscar Issac has leading-man looks, Poe never really had a romance developed for him, except for hints that perhaps something with Zorii will develop in the future. 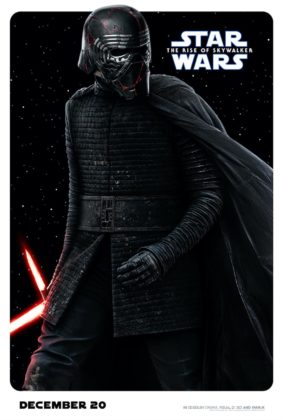 I will always wonder what storyline was planned for Leia and Kylo, had Carrie Fisher not died. He killed his father and was a mass-murderer, how was he possibly going to be redeemed? That a romance with Rey was suggested throughout the movies, and their kiss before his death was part of his redemption was very uncomfortable because it played up a toxic and abusive relationship as romantic. What a horrible message to young viewers that one partner needs to put up with their partner’s abuse, because they can “save” that person. Please read the astute post from Michael of My Comic Relief: Reylo’s Role In Redemption- A The Rise of Skywalker Reflection that goes into much thoughtful reflection on the problems with a Rey and Kylo relationship. Seeking forgiveness and granting forgiveness is not and should not be a one-time conversation or deed by one person. While Kylo’s character was layered and Adam Driver is an amazing actor, his role was problematic from the start.

Rey is a strong character whom I liked quite a bit, but who was tarnished at the end with her family ancestry and with her choice of love interest. And what was the deal with her new healing powers? No Jedi in the past has ever done that. There had been much speculation that Rey would be Luke’s child or even Ben Kenobi’s, but in the end, she was shown to be the evil Palpatine’s grandchild. What?! Why was Palpatine even alive, much less that he had had an adult child who smuggled Rey away from him? While I hated almost all of The Last Jedi, the one thing I did like is that Jedi (or anyone) don’t need to come from an important family, they literally can come from anywhere. That was an important message for moviegoers, but that was erased here for Rey to now be fighting the dark side and her family connection to it. And that she choose Kylo to passionately kiss, over loyal and steadfast Finn? What the fuck! I did like her concluding scene, as she claims the Skywalker name, showing that one can claim their family alliance over blood-ties.

Lastly, and most importantly, let’s go over my beloved original three of Luke, Leia and Han Solo. I was devastated that Luke became a grumpy hermit and later died in the last movie (see my passionate post An Ignoble End to the Skywalker Saga on The Imperial Talker’s site) and in this movie, there was a bit of course correction in his role as a Jedi ghost, but what was done was done. Considering Fisher’s death, director JJ Abrams did his very best with existing footage of Leia to craft her farewell role. She got a good concluding arc, showing how she was helping train Rey as a Jedi, which was a lovely nod to her Skywalker heritage and the flashback to her and Luke during her own training was heartfelt and tied up some loose threads. I believe she was supposed to help redeem Kylo, and at least she did play a small role in helping him turn although I will always be sad that she and Kylo were never able to play a scene together. Han’s cameo came as a lovely surprise, I’m sure in part to push the narrative that Kylo’s parent’s love helped turn Kylo back to the Light. I just dearly wish that these three had been given a scene together (along with Chewie)- it will always be a shame that the directors choose not to have them reunite in some way.

While I’m sure Disney is far from done with Star Wars storytelling, this movie brought to a close the Skywalker saga. There is no way that all fans could be satisfied with any narrative that Disney filmed, but I just wished they had been able to capture the scope and mysticism that George Lucas had brought to his imagined universe. However, I will be forever grateful that these stories were told, and they have captured so many people’s imagination. May the Force be with you!

20 thoughts on “Star Wars: The Rise of Skywalker”