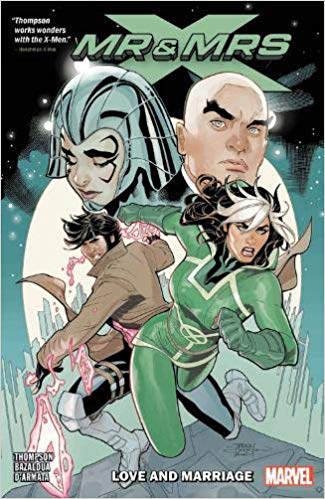 Lately, superhero weddings have been a disappointing mess. For example, the wedding between X-Men Colossus and Kitty Pryde is called off at the last moment, so Gambit and Rogue decide on the spot to get married themselves since their friends are there and the venue is there for the taking. At least a second wedding and a spin-off series came from someone else’s pain!

So in this new series about my favorite X-Men couple, we pick up right after Gambit spontaneously proposes to his longterm lady love Rogue. They scramble to get ready and there are some lovely moments between the team members as they prepare the duo for the surprise nuptials. As you can’t have a wedding without a kiss, or what happens during a honeymoon (ahem, you know what I mean!), Beast gives Rogue a power dampening collar, so she doesn’t kill her new husband when they touch.

Gambit’s idea of a honeymoon is to take Rogue to a spaceship (what???) and they spend some quality time together thanks to the collar, but Rogue can’t leave it on indefinitely. But unfortunately, their honeymoon is cut short when there is an intergalactic emergency and they are the only superheroes nearby. What luck!

So this space emergency got a little confusing to me…the Shi’Ar Empire Imperial Guard wants Cerise’s egg which contains powers (I think). Motley space groups swoop into the battle, including the very weird Technet group and the Star Jammers. Deadpool is there too (why not?) and we have his usual inappropriate banter. There is a very cool two-page fight scene of Gambit and Deadpool working together and arguing the entire time with an alien calling Deadpool the “mean jokes man with the stomach hole”. Xandra, a shapeshifter, gets involved and Rogue makes an impulsive decision and pretends to die but it is an illusion. Rogue absorbs powers very easily here and she worries about how that will affect her and Gambit in the future.

Afterward, the story lightens up and the two return to Earth and have a party at Remy’s apartment. On a side note – he has three adorable cats! There is a bit of an issue when Bella Donna, Gambit’s ex-wife, drops in and they need to deal with an Assassins Guild vs Thieves Guild feud. But in the midst of it all, there is a fun apartment scene of many X-men talking and hanging out at the party. The story ends with them opening a box that transports them upside down above crocodiles. There is some funny commentary about marrying off leads, and what will happen in the next volume…

The art was adequate but not totally to my liking.  The people were drawn cutesy style, which makes them look too anime-like and young. Later in the series, some of the pages show an illustration style change. An issue that I have with many Marvel titles is that the cover doesn’t represent fully what is happening inside. Professor X is on the cover, when he wasn’t in the book, except for a brief memory for a certain someone. And that brings me to my next question- why exactly wasn’t he at the wedding? Perhaps it was explained in the preceding story about Colossus and Kitty Pryde.

All in all, this was a good story about Rogue and Gambit. The X-Men are known for their soap opera-type romances, that are on-again/ off-again, so I hope this newly married couple can withstand Marvel writers ripping couples apart. I truly want them to have a happily ever after! ♥