This is a short but powerful graphic novel about two young First Nations women in Canada that face the perils of being Indigenous in the city together.

Best friends at school, Miikwan is Anishinaabe, while Dez is Inninew.  The two high schoolers bond is so tight that they completed a berry fast together, which is a rite of womanhood in their tribes. Despite their close friendship, they have each faced great trauma in their lives. Miikwan’s mother is missing and presumed dead, while Dez lives with her elderly grandmother who is facing health problems, and social services is planning on moving her into foster care.

Dez briefly runs away as Miikwan gets involved in a protest to bring attention to the crisis of stolen sisters. What makes this story especially poignant was the effective use of showing dead Native women as spirits surrounding their loved ones, and dark alien type creatures besides men that wish these woman harm. While the girls could not see these unearthly creatures, the readers could, and it ramped up the tension as you desperately hoped the girls would avoid the evil that seemed to be near them often on the city streets.

The artwork was well done, showcasing the diversity of Indigenous tribes, and spotlighting that not all tribe members live on reservations. The color palate was in warn earthen tones, and the panels flowed well on the pages, with some lovely imagery. As a stated above, the unseen presences surrounding the girls elevated the story, and drew you into their world. It also clearly showed the pride and connection they each felt about their cultural heritage, which was a direct message from the author and illustrator, who both have Native ancestry.

An afterward explained some information about the crisis of missing and murdered Indigenous women and gave some excellent statistics and further reading suggestions. I do wish this afterward had included even more information. While I have some knowledge of berry fasts and two-spirit people, I really don’t think many people outside the Indigenous community will be familiar with these terms. Some explanation within the preceding narrative text, or in the afterwards should have been added. For two other well done graphic novels about other aspects of modern Indigenous life, read The Outside Circle and Roughneck.

I applaud this book for the awareness it brings to the plight of Indigenous women and the families they leave behind. Please do further research on the crisis they face, for this situation is also present in the United States, and needs to be acknowledged. 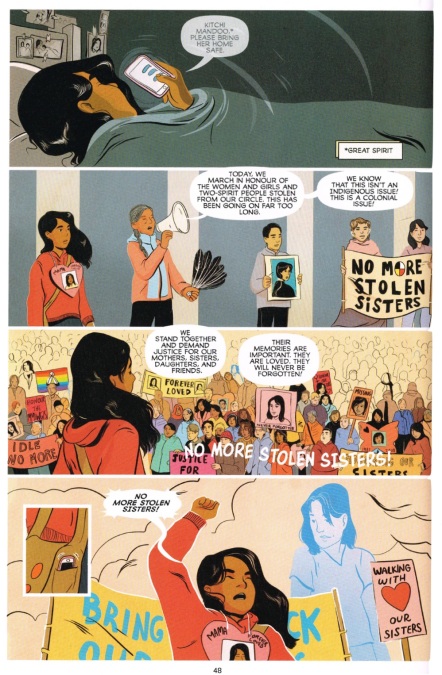