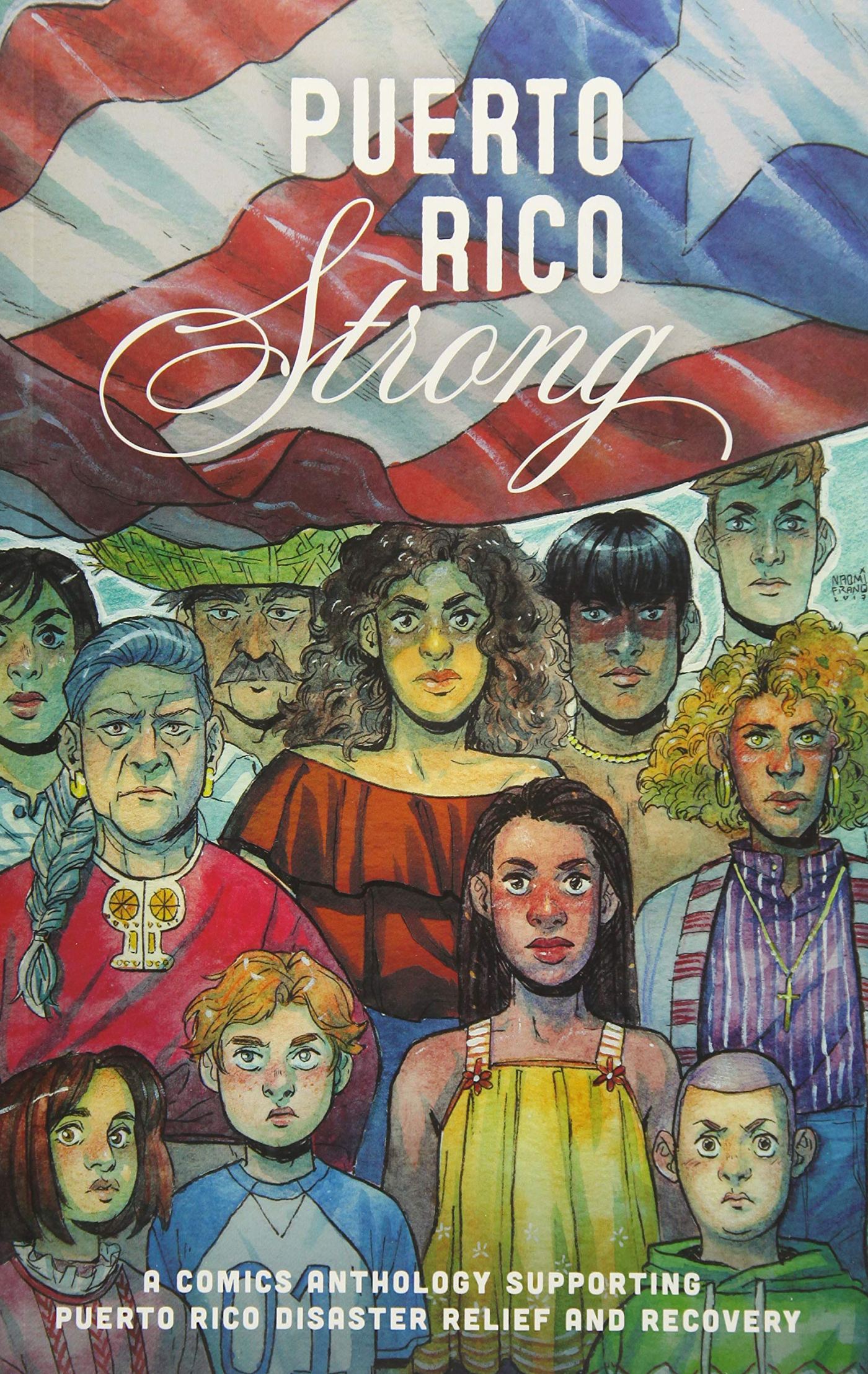 “Puerto Rico Strong is a comics anthology that explores what it means to be Puerto Rican and the diversity that exists within that concept, from today’s most exciting Puerto Rican comics creators.” The proceeds from this book sale will go to UNIDOS Disaster Relief & Recovery Program to Support after the back to back hurricanes that devastated the island in 2017.

As with any anthology, this collection was uneven. Pair that with a graphic novel format, and there are some illustration styles that will not appeal to everyone, but the art as a whole is well done. Written with the best of intentions, these one-shot stories that are only a few pages, vary in tone and authenticity. Also included were one-page splash pages, which I thought were a lead-in to a story, but indeed were only that page- which proved off-putting. Some of the comics were powerful and made me tear up, or even better, made me think about the issues beyond that page. Others were trite and lacked depth.

I appreciated learning more about Puerto Rico and the history that has shaped this US territory. Several stories spotlighted their Taíno heritage, who were the first inhabitants before Columbus and Spanish conquistadors destroyed their culture.  Paired with their early history, was modern-day history and how misguided US involvement has caused financial, ecological and cultural disasters. In addition, a few of the stories dealt with the eugenics that women endured as pharmaceutical companies preyed on those they felt that they could manipulate.

Thanks for Nothing by Tom Beland-  I was surprised that there wasn’t more anger directed specifically at Trump, only Beland’s righteous barbs referred directly to Trumps’ epic mismanagement of disaster relief.

La Casita of American Heroes by Anthony Otero & Charles Ugas- Lovely story of a woman soldier coming home with her child to the island to check on her parent’s safety. She teaches her daughter about all the soldiers on both sides of her family who have fought for America, but often are not considered American.

The Dragon of Bayamon by Jeff Gomez, Fabian Nicieza & Adriana Melo- An 11-year heads to Puerto Rico to stay with his abusive father for the summer and has to deal with not speaking Spanish fluently and his father’s moods. I liked this story, but it needed fleshing out.

Reality Check by Tony Bedard & John R Holmes- This story rubbed me the wrong way on the first page but the father’s explanation of the conquistador’s role on the island in relation to the Taíno was shocking, but he juxtaposed it to other nation’s helping now after the hurricanes. Still not on board with his reasoning, but it truly was thought-provoking.

I have to applaud this book, for these artists did not just sit back and send their best – no, they did their best and donated their time and talent to help a hurting community. The stories open lines of communication, and I love how authors and illustrators who were Puerto Rican added their #ownvoices to the dialogue. While often too sentimental, the right intent is there, and purchases of this book will benefit those in need.