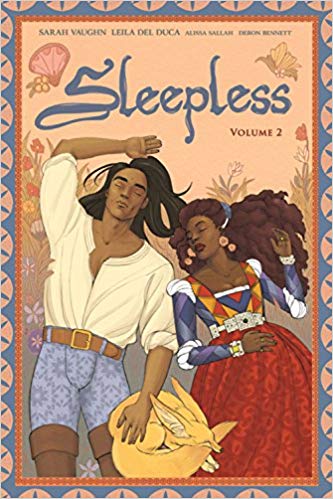 I recently discovered the lush romantic fantasy series Sleepless and quickly read the duology. I just wish it had been a longer series, as I enjoyed the love story between Poppy and Cyrenic and think it could have at least been fleshed out into three volumes.

The second volume opens almost a year after the first, with Cyrenic awakening from his sleep after being released from his magical vow of eternal wakefulness. Poppy is being forced into a marriage of political convenience to Lord Helder, the very man she suspects of trying to kill her, but the king has blinders on and pushes her to go through with the wedding. Surprisingly the marriage ceremony does occur, but Poppy has her own reasons for going along with it. However, the wedding night spins out of control and Poppy and Cyrenic are on the run.

As Cyrenic is the first sleepless knight to be released from his vow, and deals with his recovery afterwards, there were some interesting perspectives from the other knights about if they too would like to be released. There were some thought provoking reasons as to why some of them would prefer to stay sleepless. The last half of the book is a long action sequence, and an additional villain is revealed, but the reasoning behind this second person wanting vengeance against Poppy felt ridiculous. During their escape Poppy and Cyrenic reaffirm their love, but it was rushed and could have been so much more. 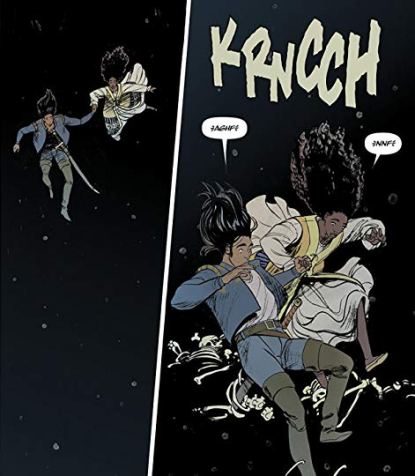 The artwork was as lovely as ever, with the wedding scene being especially well done. The patterns and brocades of the clothing worn were exquisite. I felt the illustrations really lent to world building, for the interiors from the throne room to the kitchens combined into a believable kingdom. The coloring also added to the atmosphere with jewel tones for the courtly attire, decorations and poppy motif to earth tones for much of the action. Plus, Bini the fox was as adorbs as ever. An added bonus at the conclusion was alternative covers by other artists and some process pages that showed the evolution of the artwork throughout the story.

I do want to point out two glaring oddities. There was much made that Poppy’s mother is in her home country and can not return due to political issues and many letters are exchanged between the women. Although a wedding gift from her mother helps Poppy during a crisis,  we still do not meet her, even at the end when all has been resolved. And look at the picture above- these two are falling about 50 feet and land on a pile of bones. This would have killed them, instead they act as if it was a cushion, and then there is some throwaway conversation about the caverns and bones needing to be researched.

As a whole, this was an excellent short series. But there was definitely enough plot threads that could have been expanded upon that a third volume would have been very welcome. Author Sarah Vaughn created a beautiful fantasy world that artist Leila del Duca built upon, and I’m glad that I visited their magical realm! 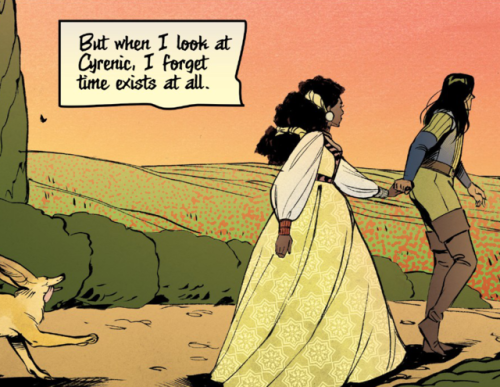