Top 5 Wednesday is a meme from Goodreads, and this week’s topic is: Books you thought you’d hate but ended up loving. 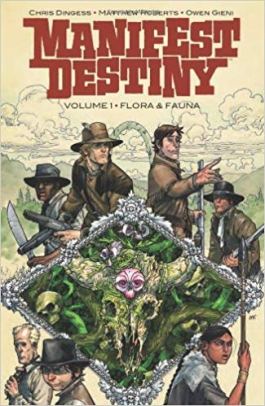 I hated this first volume that re-imaged the Lewis & Clark Expedition by Chris Dingess. I said “So Image Comics takes history, government conspiracies, and re-images (get my pun?) the events by shaking it all together into what I consider a convoluted mess.” It took me two years to reluctantly pick up the second volume and then I quickly read through the sixth volume. I then said ” I have discovered that I should not always give up on a series when the first volume rubs me the wrong way, as this recently happened in Northlanders (hint for my next book!) too. Yes, I still have issues with some of the depictions of the characters but the way that history, colonization and government conspiracies are shaken up together have made for some interesting stories. And the art- well, that’s what has truly made the series. Matthew Roberts has done his research on the era and regions in which they are traveling through. His creatures rival Lovecraft’s with detail and imagination. I admit, I will be picking up future volumes and read it to the end of their journey.”

I am big fan of author Brian Wood and his historical fiction graphic novels, but I have to admit if this was the first time I read his work, I would have stopped here.  The main character Sven is not likable in the least from his childhood on, and the tired trope of a good woman taming a bad boy is used here. The artwork was a mixed bag for me, but I really liked Enna, the woman Sven eventually marries. I only picked up the next volume when I knew Enna was in it, but the other standalone Viking tales in the second volume were good, and I ended up really enjoying the entire seven book series.

I heard that this graphic novel gave a unique take on serial killer Jeffrey Dahmer, but I was skeptical. I felt weird reading it and the art style took some getting used to, so it took me awhile to read it in it’s entirety.  But this disturbing book about a serial killer’s youth was heartbreaking, as the book makes us witness to Jeffrey Dahmer’s slide into madness, from the viewpoint of a former classmate and “friend” of his. Derf Backderf, the author and illustrator, gave a nuanced take on the background of Dahmer, so I ended up pitying Dahmer and wondering if tragedy could have been diverted if just someone had noticed his problems and stepped in to help. Worth a read! 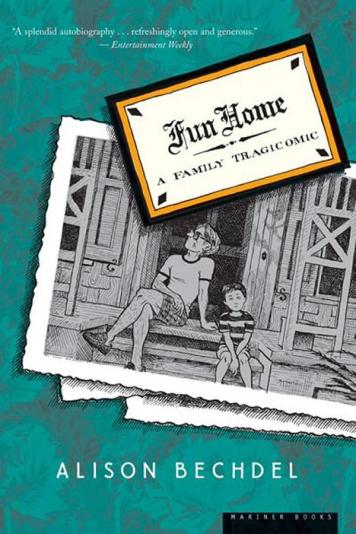 I picked up this book, read a bit, and put it back down a dozen times. Not because it isn’t excellent- it most definitely is- but the author’s relationship with her unhappy and distant father is much too similar to mine. This book breaks my heart, and brings up many painful memories for me. But I persisted, and am glad I did. Author and illustrator Alison Bechdel chronicles her childhood through her early years of college, plus her coming out, in a non-linear memoir. Bechdel’s raw autobiography was turned into a musical play that showed on Broadway, and she shared her feelings on that representation of her family in this enlightening nine-panel drawing Play Therapy.  That this book, and perhaps the play, can affect people deeply is a testament to the power of family and how it shapes us.

I typically am not a romance fan. Sure I don’t mind some romance in a novel, but as a genre- no thanks.  But a co-worker and fellow book lover told me this book was a combination of Clan of the Cave Bear and Outlander, so I had to give it a try based off that review. I ended up loving this book- I devoured the book in 24 hours, and then started over and re-read it again. Usually I stay away from romance novels that are historically inaccurate (admitted by the author Shay Savage), but I could not get enough of Ehd and his devotion to Beh. I loved his perspective of everything that was happening and what he thought of Beh’s habits. Beh was able to resist this sexy caveman much longer than I ever would have! I dearly hope the author writes a book from Beh’s perspective, so we can see what she was thinking during their time together.

So the moral of the story is- don’t give up! Just because you didn’t connect with a book right away, or that it’s not your typical genre, doesn’t mean that it’s not worth a second try. You might just be glad you read it after all.

2 thoughts on “Top 5 Wednesday: Books You Thought You’d Hate But Ended Up Loving”