Harrow County’s southern gothic thriller has drawn to a close.  I reviewed all eight volumes within six weeks time as this supernatural series hooked me in and I devoured it. The narrative stayed strong the entire series with no let down in the middle and the conclusion was everything I wanted it to be.

Kammi is back…as if there was any doubt she wouldn’t be! In this penultimate volume, forces are gathering to destroy Emmy and all of Harrow County. Emmy endures two significant losses but has no time to mourn as Kammi is relentless.  Bernice fights right alongside her and the two woman do their best to keep Emmy’s “sister” at bay. We find out why Emmy and Kammi are so important to the witch coven, and who they represent. Just as you think Emmy has scored a hard-won victory at the end, she makes a soul crushing decision and we know her biggest battle is still ahead of her.

As we head into the last volume, I wanted to give a final shout-out to Tyler Crook’s art. His  haint creatures were creative and varied, and I thought of his work and H.P. Lovecraft’s as being similarly inspired. His work came to define Harrow County for me with it’s townspeople, rural landscapes and sinister woods. The only complaint I had is of his giving Emmy and others too much of a red cheeked look- it looked as if they had bad head colds for no discernible reason, although I soon stopped noticing it. The two page spread opening this book was creepy awesomeness, and I will never look at a close up of someone’s teeth without flashing back to this series. 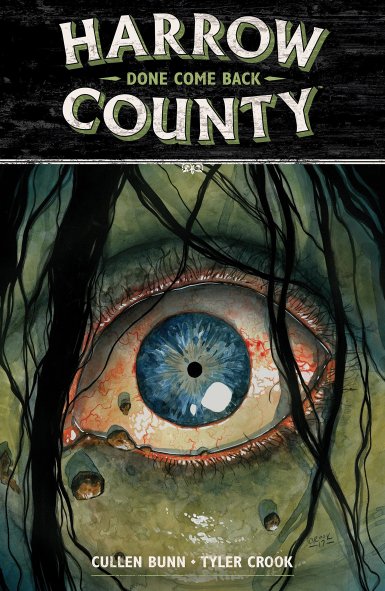 Emmy’s decision at the end of the last volume, which she thought would make her stronger, did the opposite. She has corrupted herself and betrayed her goodness by letting evil in willingly. She and the original witch Hester battle for dominance as the lives of everyone in Harrow County hang in the balance. The mythology runs deep in the story with the minotaur haint, The Abandoned, playing a significant role. The ending seemed appropriate to the feel of the series, and it concluded on just the right note. The story was fully told and brought to a fine end, but a whisper of  the narrative could be picked up for further stories if author Cullen Bunn and Crook ever wanted to revisit the series.

The afterword by Bunn and Crook was a bittersweet way to wrap up the series and it truly signified the end, as no storybook of Crook’s art bookend this volume. Bunn told an excellent story and brought it to a close in a satisfying way. A big plus in this series was that Bunn created a lovely friendship between Emmy and Bernice. It is a sad reality that friendships between two females in books often are non–existent, or their interactions revolve around a boy. But in this series the two friends have an authentic and deep friendship and there is nary a romance to be found. I loved that! Thus, this story is so much more than an atmospheric supernatural tale- it touches on friendship, destiny, good vs evil and the choices we make and how they define us.

I am so glad I visited Harrow County. This was a wonderful series that didn’t drag or go on for too long. Bunn and Crook told a strong story from beginning to end, with an epic arc that should satisfy all readers. Go ahead and visit Harrow County yourself- you will be glad you did!

Check out my other Harrow County reviews: Volume One, Volumes Two-Four, Volumes Five-Six 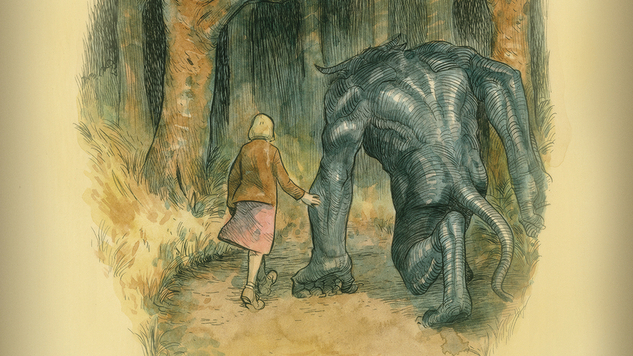