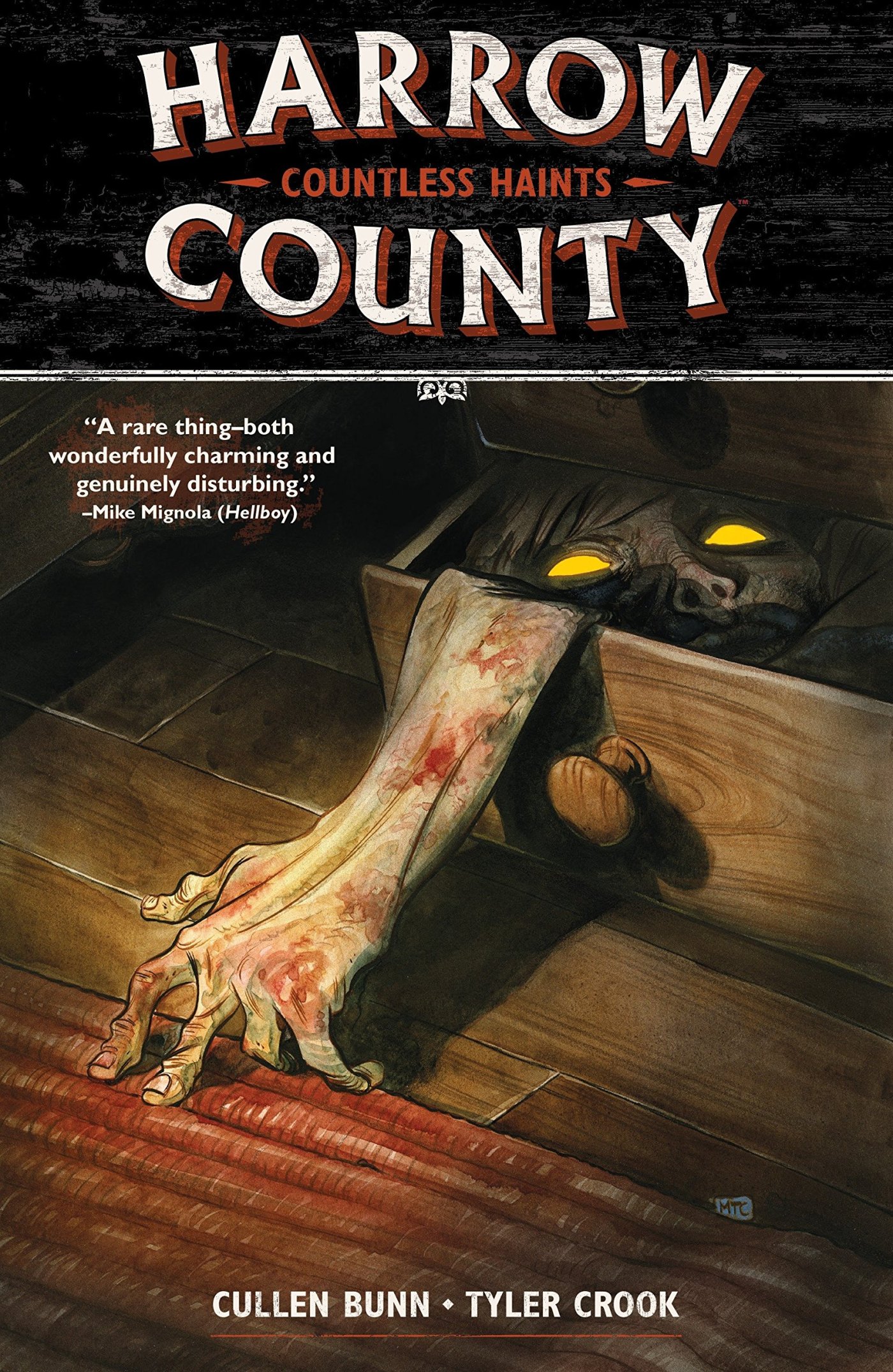 Harrow County is an eerie southern gothic fairy tale, and after recently reading Bone Parish and now this, Cullen Bunn is becoming a favorite author of mine.

The opening pages begin with the hanging of suspected witch Hester Beck. As she is hanging from a tree while lit on fire, she swears revenge and tells the surrounding crowd that she will be back.  This old burnt hanging tree is on the edge of the property of teen Emmy and her widowed father. Emmy is about to turn eighteen and is helping her father with a calf’s birth, when a traveling salesman and his granddaughter Bernice arrive on the farm. The two men speak privately about their worries that Emmy could be a reincarnated Hester, and that her birthday will reveal a hidden evil. Later when Emmy is exploring the nearby woods, she discovers her first haint, a skinless boy that speaks to her. It is his later warnings that alert Emmy that danger is near, and her seemingly kind father doesn’t even trust her. A showdown occurs, and secret alliances are revealed. Who can Emmy trust? Her father? Bernice? The skinned boy? Can she even trust herself?

The story has a lot of potential, as Emmy is shown as a young woman who is trying desperately to understand the mysteries of her possible origin and the decades long secrets that the townspeople have. This is a much better adaptation of that sort of story than the disappointing Wytches. The title hints that countless more ghostly haints will be discovered, and how Emmy reacts and utilizes them will certainly be intriguing.

Illustrated by Tyler Crook, he creates an atmospheric southern locale with believable and varied townspeople. His dark woods scenes are my favorite, with his spooky corners that could harbor sinister haints. He opened each new chapter with a two page spread that somehow incorporated the words Harrow County into the background, and I enjoyed looking for how he would do it each time. His artwork is reminiscent of Emily Carroll’s work in Through the Woods, and the comparison holds up because both Carroll and Crook draw their characters young looking with an apple cheeked motif. In this case, Emmy was drawn way too young looking. At eighteen years old, she should have been drawn as a young woman and not so child-like, but other than that complaint, the artwork is a perfect match for the story.

As this was the first of an eight book series, I aim to visit Harrow County more in the future and see what awaits Emmy!