The Hobbit: An Illustrated Edition of the Fantasy Classic 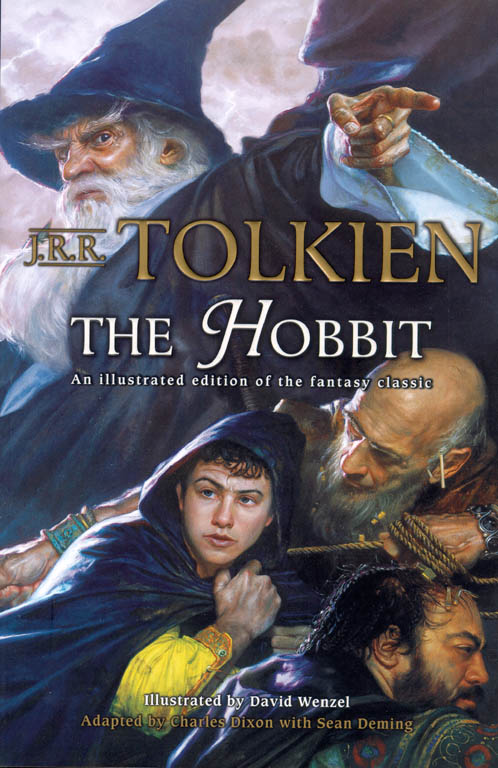 Bilbo Baggins is a hobbit content passing his days sitting on his front porch, blowing smoke rings, and drinking tea. All that changes when the wizard Gandalf appears on his doorstep, asking if Bilbo would like to participate in an adventure. Well, hobbits simply do not have adventures! But despite Bilbo’s protests, Gandalf along with a large group of dwarves show up at his door for tea the next day. They are on a quest to take back the stolen treasure that is their leader Thorin Oakenshield’s birthright. One problem… the treasure was stolen by a dragon named Smaug. Bilbo, of course, is horrified… and intrigued. Despite himself, he finds himself travelling with the band of dwarves and wizard. Together, they meet elves, almost get eaten by trolls, get kidnapped by goblins, and confront the most feared dragon in Middle-Earth.

The subtitle stresses that it’s an illustrated edition, which I think in a few respects is true. While it is laid out like a graphic novel, and reads like one, this one is significantly more text-heavy than previous graphic novel adaptations I’ve read. It takes dialogue and expository passages straight from the book. As a result, there are many more text boxes into which the text was all squished. This made the text very small and hard to read at times. The book could have greatly benefited from a larger format (it was a little smaller than your usual trade paperback), or further editing to cut out some of the more unnecessary text.

The illustrations were lovely. They were whimsical and colorful and perfectly suited the lighter tone of The Hobbit. Even the darker places and passages were filled with a light and airy quality. I enjoyed them very much, and I could easily see the appeal for both older and younger readers. Like with the Harry Potter Illustrated Editions, I could see this edition being used by parents to introduce Tolkien to young children. It was in the teen graphic novel section at the public library I work at, but I’d say middle school children would be able to read it on their own.

While a bit too text-heavy for my taste, this was a wonderful adaptation of The Hobbit in graphic novel form. The illustrations will be the big appeal here, as they draw you into a whimsical and colorful Middle Earth.

Tolkien, J.R.R. Adapted by Charles Dixon with Sean Deming. Illustrated by David Wenzel. The Hobbit: An Illustrated Edition of the Fantasy Classic. 2001.