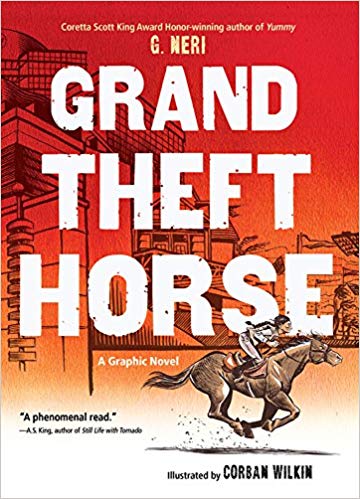 Nancy and I both hope you all are having a wonderful holiday so far! For my post this week, here’s a review of a graphic novel that starts on Christmas Eve… that makes it a Christmas story, right? =P

Gail Ruffu is a wanted woman. Her crime: Grand Theft… Horse? Believe it or not, it’s true! She was the first woman since 1850 to be charged with such a crime. However, she had very good reason. In order to protect Urgent Envoy from the brutality of horse racing, and an apathetic co-owner, Gail stole him from the racing stables on Christmas Eve 2004 and spirited him away to a boarding stable. She told no one where he was, though the co-owner, a former friend of hers and a lawyer to boot, cracked down with a lawsuit, hired a private investigator, and resorted to blackmail to try and get Urgent Envoy back. Gail stood her ground even as she lost all her money, her training license, and her way of life. She lost it all in order to do the right thing – but will it pay off in the end? Can she win the case that’s gone all the way up to California’s Supreme Court?

… Wow. Just wow. This is a tale so big it seems unreal, but it really did happen! The author, G. Neri, is Gail’s cousin, and upon hearing the story from Gail herself, he thought, “That would make a great book!” (Introduction page). There’s more than just the story of Urgent Envoy’s case here: Gail’s childhood and early adulthood are touched on as well, to explain how she grew to love horses and ended up in the racing circuit. The writing is succinct, tense, and conversational, as if Gail herself were telling us the story.

The artwork is tense, too. Corban Wilkin’s linework is blocky, angular, and even so, curiously expressive. He managed to not only convey horses accurately, but give them expression and personality without making them caricature-like. I finished a painting of horses in the fall that took me TWO YEARS – so believe me when I say, what Wilkin did was no easy feat. In fact, I’m jealous. I’m ready to scrap my whole painting X,D

This graphic novel is part Western, part legal drama, and part animal lover’s tribute. Above all, it’s an underdog story. Gail went up against impossible odds for the sake of a horse’s well-being. You’ll be rooting for her the whole way through.