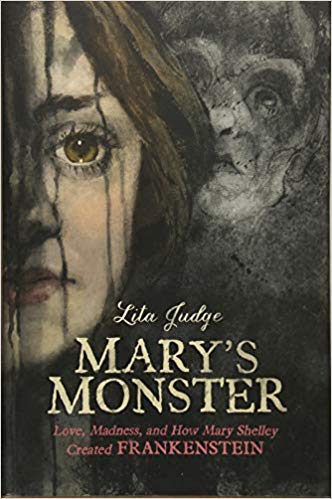 In honor of Halloween and the 200th anniversary of the publication of Frankenstein, I choose Mary’s Monster, a poetic and beautifully evocative book about Mary Wollstonecraft Godwin Shelley, the author of the classic 1818 novel. This fictionalized biography by Lita Judge details Mary’s life from childhood onward and is told in free verse.

Mary was born into a literary family- mother Mary Wollstonecraft was a writer while her father William Godwin was a political philosopher. Her mother died when Mary was an infant, also leaving an older half sister. William remarried, which brought step siblings into the family, in addition to having a son with his second wife. Failed business ventures and an unhappy family life plunged the family into poverty and discord. Mary was sent to live with family friends in Scotland for two years, and when she returned as a teenager, tensions at home were still high.

Soon after returning she met Percy Bysshe Shelley, a young poet from a rich family who seemed enamored with Mary’s scholarly family, and her father and step-mother hoped he would help them with some debts. Quickly Percy convinced Mary that his marriage to his pregnant wife Harriet was over, and he seduced her easily. Step-sister Claire is also taken in by his words, while the rest of the family is scandalized by Mary and Percy’s affair. The two girls steal away with Percy and head first to Paris, then around Europe.

But words don’t pay the bills, and the trio are soon destitute with Mary pregnant. Shunned by her family, she delivers a daughter but the baby soon dies, and Mary is heartbroken. Throughout the next few years, Mary endures Percy’s whims, with him dallying with Claire and him stringing along his wife Harriet until she commits suicide. Two more children are born and die during their travels, with only their fourth child, a son, surviving to adulthood.

During this time Percy, Mary and Claire visit Lord Byron in Geneva, Switzerland, and the famous challenge is issued for them all to create a horror story. The genesis of the story takes root, and Mary begins her magnum opus. Mary takes threads of despair from her own life and weaves them together with biting political and society commentary to create the Frankenstein masterpiece. Despite his many flaws Percy encourages Mary to write and believes she has just as much right to be creative and write as he does. It is only after Percy’s accidental sailing death a few years later, leaving Mary a widow at twenty four with a young son, does Mary claim ownership of the Gothic story that had originally been published anonymously.

Dark and lovely, the art brings Mary to life, just as Mary brought the creature Frankenstein to life. Judge’s moody black and white watercolor illustrations, paired with the sensuous verses, effectively show the ideals and passions that ruled Mary and Percy. Mary’s tumultuous life helped shape her into a masterful writer, and led her to create an unforgettable novel. She and her creature won’t soon be forgotten.