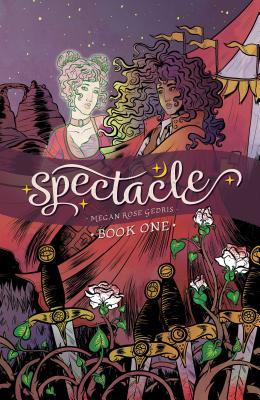 Anna and Kat are twin sisters working in the Samson Brothers Circus. Anna works as the circus psychic – but she doesn’t believe in any of that supernatural stuff. She’s a woman of science, who only believes in what she can prove, what she can see with her own eyes. Kat is a knife thrower, and her charisma wins over both the audiences and the other members of the circus. It’s a complete shock when Kat is found murdered in the train car her and Anna share. Even more shocking? Kat is still here, as a particularly demanding ghost, and she is sharing Anna’s body. Anna is freaked! There’s supposed to be no such thing as ghosts! Her sister isn’t supposed to be dead! Together, Anna and Kat must solve the mystery – and figure out the reason behind the strange phenomena the circus has been experiencing lately.

The circus setting of this graphic novel is very refreshing. The circus is a place where you can always expect the unexpected: and this story delivers. It’s at once a murder mystery, a supernatural suspense, and a story about family. If you’ll pardon the pun, having this many elements in the story is quite a juggling act! Megan Rose Gedris manages to keep the momentum going without sacrificing one aspect over another. As characters, Anna and Katy both contain multitudes, and there are hints that not everyone in the circus, even the twins themselves, are not what they first appear to be. The art is appropriately colorful, lively, off-kilter, and highly expressive. Gedris is a highly talented creator – I can’t wait for the next volume!