The Autobiography of Jean-Luc Picard

After my rough start with The Autobiography of James T Kirk, I was leery of picking up The Autobiography of Jean-Luc Picard, but I’m glad I did. Listed as the “story of one of Starfleet’s most inspirational captains” it is presented as if it were written by Picard and once again it is “edited” by David A Goodman.

The foreword by Beverly Crusher Picard immediately establishes that Picard and Dr. Crusher married sometime after their TNG days together, which pleased me to no end, but when Q co-opted her foreword I almost put the book down. The editorial choice for Goodman to interrupt a book by Q was unbelievably lame.

We start in Picard’s youth on his family’s vineyard in Le Barre, France, and he establishes the difficult relationship he had with his father and older brother. He shows ambition from an early age and never gives up on his quest to join Starfleet. His Starfleet days showed that he was a stickler for the rules, and didn’t necessarily have the charisma that you associate with a captain.

To me, the book started to take off when he graduated and began his career leading to an early captaincy of the USS Stargazer. He ended up spending 20+ years on that ship, and we are shown why he would choose to stay on an old ship for so long. Normally we associate officers in Starfleet as having stellar careers but Picard has some ups and downs, and sometimes makes decisions that are a bit suspect. He also has time off-ship and has to deal with bureaucracy and uncertainty. 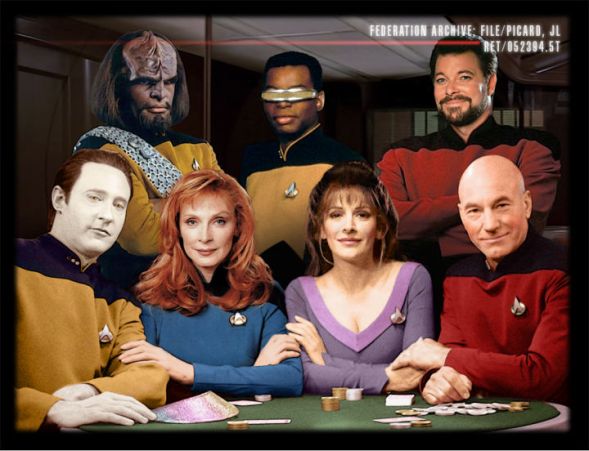 What I liked about this book, so much more than the Kirk novel, was that the relationships between Picard and others were so much more believable and fleshed out. His friendship with Jack Crusher and a young Beverly on the Stargazer, established the crushing guilt he felt when Jack died under his command leaving Beverly widowed with a young son. He long carried a torch for her but felt he couldn’t act on it. I enjoyed meeting some people from his past that were new to me, and I loved every time that he first met a character that you knew would play a role in what we know as Star Trek canon.  When he was given the USS Enterprise to lead he specifically asked for some officers that he had met in past missions on other ships.

His time on the Enterprise wasn’t covered in-depth, as this book is geared mostly to fill in gaps of his life we are not familiar with. I was disappointed that so few pages were devoted to his time with the Borg, as I thought that was a crucial and life-changing event for him. His later years, including his time as Federation Ambassador to Vulcan, and his late in life marriage to Beverly isn’t given much time either.

These books are supposed to be viewed as canon, as they are approved by Paramount and CBS Studios, but as it was written in 2017 I question how much it will hold up as it was recently announced that there will be a new Star Trek series starring Patrick Stewart who will once again play Jean-Luc Picard. While I am thrilled at the chance to experience further adventures with Picard, I do wonder how they will handle storylines, and if any of his TNG crew will make appearances, especially Gates McFadden who played Beverly. Please have all of them on the show- make it so!

An autobiography about Spock will be coming out in August of 2019 (edit- pushed back to September of 2021), and since my opinion of these novels written by Goodman has improved, I plan on picking it up. I need to know the identity of Spock’s wife that was hinted at in this book! In the meantime- live long and prosper my friends.

9 thoughts on “The Autobiography of Jean-Luc Picard”