Two years ago (has it been that long?!) I wrote my first post about playing Pokémon Go as an adult. At the time I justified it, for all three of my children played it as did many of youth at the library I work for.  But my children have all quit, yet I am still playing. I am the only Mom out there who wants her kids to play, and was sad when they stopped.

For 2+ years I have consistently played this game- which is quite shocking even to me- as I have never been much of a game player. I played some Pac-Man in my youth, and I’d play Mario Cart or Wii games with my kids, but I never saw the appeal in video or handheld games. Until now. I seriously can not stop. Once they introduced the incentive of earning extra points if you played consecutive days, I knew I was hooked. The game amuses me to no end, like when I find a gym that players have filled with all of one type of creatures- just for fun. This one was filled with all flyers. 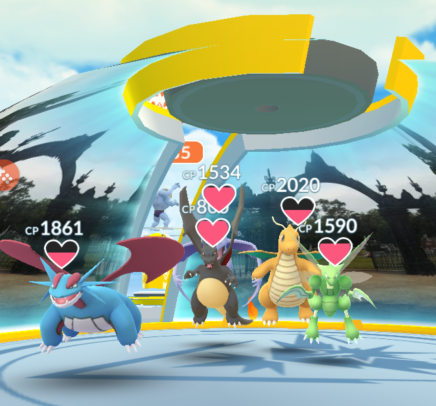 A point of pride for me is that I have never spent a dime on this game. You can buy “coins” that let you purchase more tools to help you in the game, or even to buy your avatar more clothing. Since I’m embarrassed to even be playing this game at my age, I’m certainly not going to spend money on it. I like to pat myself on the back and tell myself my game play is more authentic that way.

I have been planning on writing this post for awhile, but I set a goal for myself to catch the elusive Mew first. I did so through “A Mythical Discovery” that had gamers compete eight multi step challenges to earn the right to catch the legendary Mew. One step took me forever to complete. Kathleen who also plays sent me a funny message with a screen shot she took of a glitch in the system that showed me catching a creature that at that time I had not captured yet.

During my recent family vacation, I finally completed that last excellent throw and captured the little bugger. I actually squealed and shouted out to my family about my success. They were not as impressed as they should have been.  All this effort for a pink little cat/mouse hybrid thingy.

I have no plans to quit and am quite excited that next week a new quest is being released that will set me on a new journey to nab the new legendary Celebi.  It just goes to show- that you never know what game (or book) will appeal to a person. So, I gotta GO, and catch me some more Pokémon!