Two years ago when I read Volume One: Flora & Fauna of this series that reimages the Lewis and Clark expedition, I hated it. I was turned off by the historical inaccuracies and the crudeness of the characters. But I recently decided to give it another go and picked up the next three volumes.

In the first volume, Lewis and Clark and their expedition encountered a living arch, Minotaur type creatures who are half human/half bison and vegetation that takes over people and turns them into plant zombies. The remaining crew, plus a pregnant Sacagawea and her husband, and a few survivors of the doomed settlement La Charette uneasily continue westward on the Missouri River. When their boat gets stuck in the middle of the river, Lewis swims under it to find it attached to an underwater arch. A Cthulhu-type frog creature attacks them, plus they encounter huge mosquitos and one other monster. We also get a flashback to President Jefferson recruiting Lewis and Clark and view the strange skull he has in his possession that led to him ordering the expedition.

More monsters. More mayhem. This volume leaves no doubt that when an arch is discovered, there’s always some sort of monster lurking nearby. In this volume, two bird like creatures are discovered, one of which requires a new human head to be placed on it’s monstrous body in order to survive. They also warily befriend a colony of giant blue birds that speak English to them and help them defeat the vampire bird. What Lewis and Clark do at the end of this volume is heartbreaking; what they order is cruel, vicious and unwarranted, but mirrors white colonization.

We get our first clue that this 1804 expedition is not the first that Jefferson sent out. We get a small flashback to 1801 and are introduced to Captain Helm and what we assume was a failed mission. We also get some backstory of Sacagawea’s childhood and how she was raised to be a warrior.

Guess what creatures we meet next? We start off with a lengthy look at Captain Helm’s 1801 mission and how his expedition wintered in the Pacific Northwest. He too had figured out that arches meant danger, so he and his crew build a cabin where they don’t see any arches. But a mysterious soldier from America’s distant past contacts him and helps him hunt Sasquatches for food, as Helm’s crew is starving. Then, Helm’s story goes completely off the rails- and I loved it. Helm goes bat sh*t crazy after what he endures, and late in the book we discover that Lewis and Clark did meet him. So the subterfuge goes deep with Lewis and Clark knowingly taking their crew into danger. But despite Helm’s warnings, you see on the last page they have made a deadly mistake when snow reveals something they did not see earlier, as they too are preparing a cabin to stay in through the upcoming winter. 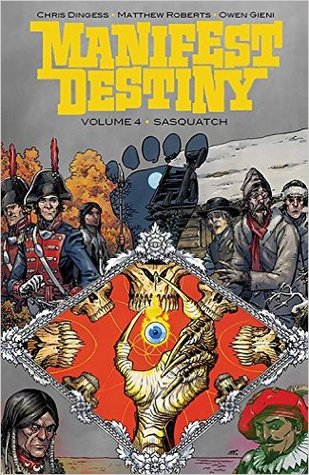 I have discovered that I should not always give up on a series when the first volume rubs me the wrong way, as this recently happened in Northlanders too. Yes, I still have issues with some of the depictions of the characters but the way that history, colonization and government conspiracies are shaken up together have made for some interesting stories. And the art- well, that’s what has truly made the series. Matthew Roberts has done his research on the era and regions in which they are traveling through. His creatures rival Lovecraft’s with detail and imagination. I admit, I will be picking up future volumes and read it to the end of their journey.