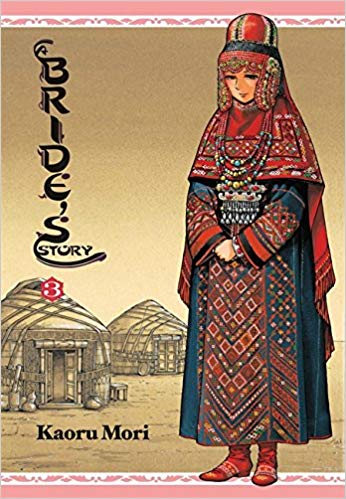 In this volume, we catch up with Mr. Smith! He is a researcher from England who was a guest in the Eihon household for a long time. He departed in Vol. 2 to continue his research about the people who live on the Silk Road. He meets a young woman named Talas at the market in the next town, where he is waiting for his guide. Their horses are stolen, and upon their recovery, she invites him to stay with her and her mother-in-law. Talas had been married previously – to every one of her mother-in-law’s sons. Her mother-in-law soon gets the idea that Talas and Mr. Smith should marry! But they don’t feel romantically towards each other – or do they?

Talas’ story reminded me of Draupadi, a character in the Indian epic Mahabharata, who married all five of the Pandava brothers. The circumstances that befall their husbands are equally tragic, though both women display a certain tenacity to weather troubled times. Mr. Smith is a great character; as he learns more about the land and people as an outsider, we do too. He acts almost as a lens! The characters in this volume are drawn tenderly, and you can’t help feeling for them. The art is so detailed, intricate, and vibrant – there is a scene where everyone is eating at the public market, and my mouth was watering from the imaginary smells!

I feel like I’ve reached a record with manga – 3 volumes in and I’m still as engaged with it as when I first started! Woo hoo! Looking forward to the next volume ❤