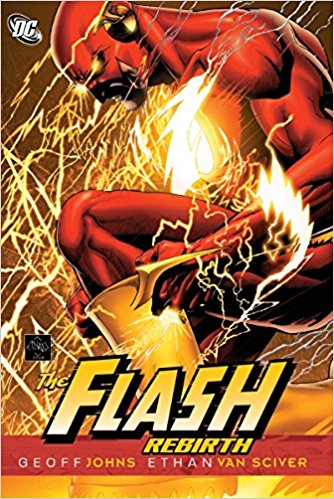 Barry Allen sacrificed himself during the Crisis on Infinite Earths to restore balance to the Multiverse. He’s escaped the Speedforce and was brought back to life, a feat that no other Speedster has been able to accomplish. Everyone – the League, the citizens of Central City, and his family – are overjoyed to have him back. In fact, the only person who’s not happy about it is Barry himself. He feels a strange urgency, like time is running out. But for what, he’s not sure. The world is telling him to slow down, but Barry feels he needs to go faster than ever. He’s not entirely convinced he escaped the Speedforce on his own – he may have been set free. But by who, and for what purpose? Could he have been brought back to life just to die again?

As big a fan as I am of the show, I can’t believe it’s taken me this long to actually pick up a Flash comic. I absolutely loved it! The artwork was dynamic and crackling with power and emotion. You know anything Geoff Johns writes is going to be good, but this story was just phenomenal. The emotional pull of Barry’s dilemma and his family willing to do anything to help is what makes this story special. The story is just as fast-paced as you’d expect a Flash comic to be, but the love that was obviously infused into the story and characters carries a lot of weight. I will definitely be looking for more.