The Secret Loves of Geek Girls 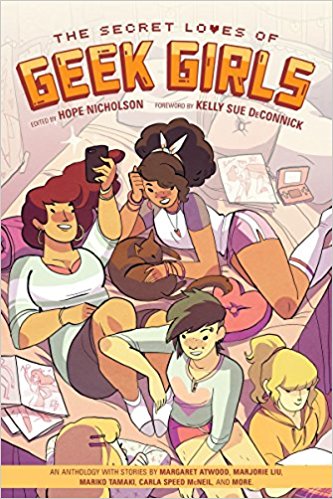 I put this book on hold at work thinking it was a collection of fictional stories in graphic novel format. What I got was an interesting mix of mini memoirs, both written and in comic format, written and illustrated by many different female creators. I was surprised, but didn’t enjoy it any less 😉

The central theme of the stories is love, which is interpreted many different ways. The majority of the stories, of course, deal with romantic love. From dating mishaps to long-distance relationships to exploring sexuality, it’s all covered here. The love of friends, comics, nerd culture, video games, and fictional characters are all covered here as well, though of course the most impactful are those that deal with real relationships. That the creators are all sharing their own experiences makes it all the more emotional and resonating.

The format varies from story to story. Some are all written word. Some are strictly comics. Still more are a mix of both: written word with one or two illustrations or a few short comic panels that emphasize a point. No two stories are alike, because no creator worked on more than one story.

As ever with anthologies, there are some great stories and some not-so-great stories. I personally found more on the “great” end of the spectrum. There were a couple I finished by skimming and only one or two I skipped entirely after the first few paragraphs. Hope Nicholson, the editor, did a very good job of making sure the quality of the content was top-notch! A few that stood out to me especially were:

The love of fandom and for significant people in the authors’ lives permeates all, along with self-love and acceptance. These girls are geeks and proud of it! The confidence and vulnerability in all these memoirs are at once inspiring, comforting, and heart-warming. Some of the stories have a little more mature content, but not enough to where I wouldn’t give it to an older middle-schooler. If you’ve got any younger geek girls in your life who need a confidence boost, hand them this. It’ll be just what the doctor ordered.