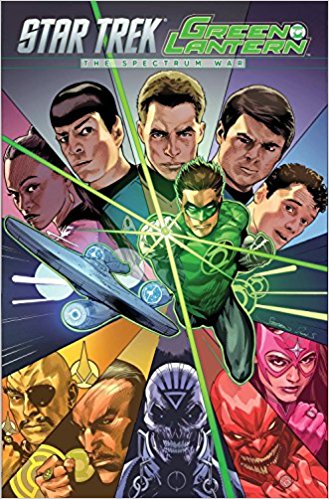 I picked this graphic novel on a whim as I am a huge Star Trek fan, and thought it would be a hoot to read about the Kelvin timeline crew meeting Hal Jordan.  IDW Publishing and DC Comics partnered together to bring us “The Crossover Event of 2015” and it did not disappoint!

I admit I am not very familiar with the Green Lantern Corps, so I really appreciated how explanations were worked into the narrative to bring you up to speed on how the whole power rings worked along with what the different colors symbolized. Cheat sheet: green, violet, blue and indigo rings are good while red, orange and yellow are bad.  Guess what- the violet, blue and indigo rings choose Star Trek crew while the evil rings went to a Klingon, a Romulan and a Gorn. These are not aliens you want to mess with folks!

Hal explains to Kirk and crew that he and a few other lanterns were pulled into the ST universe by Ganthet, one of the Guardians of the Universe, when he utilized Last Light to save the lantern corp when they were fighting a losing battle with villain Nekron. Evil lanterns from the DC universe have also been sucked into this timeline and they align with their color counterparts, but without their power batteries, all the lanterns are at risk.

Without spoiling too much, it would be safe for you to assume that there are several epic fights. Almost all of the main crew of the Enterprise get to wield ring power at one time or another. Several other green lanterns show up, and working as a team, a plan is put into action to save the universe. There is humor utilized throughout and the illustrations are top notch in this graphic novel. The Star Trek crew is drawn to resemble their movie counterparts, and as such it was sad to see Anton Yelchin (although this was written before his real-life death), yet it is heartwarming to know his portrayal will live on in books. I loved the variant art throughout, with all contributing artists submitting outstanding work.

Another crossover series with these characters is planned, so I look forward to more adventures with them. As Hal summarizes in the end, combining two motto’s into one- ” I am sworn to protect strange new worlds. New life. New Civilizations. To boldly go…by Lantern’s light…where no one has gone before!”

On a side note, I recently was in a good-natured Twitter fight with my friend Michael @ My Comic Relief about which is the best Chris. While he fought the good fight for Chris Pratt in Guardians of the Galaxy, my superior choice of Chris Pine as Kirk clearly was the winner.  In fact he even shared that a student of his said of Chris Pine, “The universe is in Chris Pine’s eyes!”. Not only does this student deserve an A+, it clearly shows how right I am. That this book that I had requested weeks earlier came in this week, is the final proof that MY Chris wins!