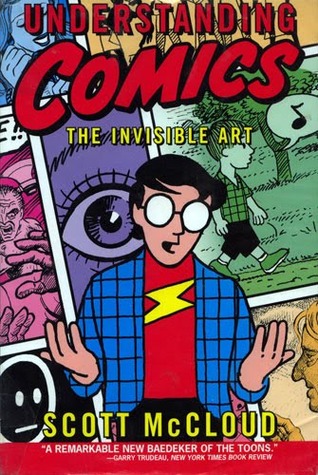 Think you understand comics? Think again! Author and illustrator Scott McCloud has created a unique educational graphic novel that can be read for pure enjoyment but also could be used in college-level courses that teach the art of illustration.

I have known about this book for several years, as it was originally written in 1993, but reading it seemed daunting. But when a certain erudite blogger suggested that Kathleen and I read it, not once but twice, I had to give it a go. Joshua at White Tower Musings– this is for you!

Since cartoons can sometimes be considered a lesser art form,  McCloud puts cartooning in a bigger framework- he goes back in time to show how hieroglyphics and picture manuscripts have evolved into comics. There is a rich history that provides the building blocks for this “new” art medium of today.

Once we push past the history of comics, we move into the parts that make the whole. How vocabulary is incorporated into comics is addressed as is the effective use of gutters in a sequence. These frames form closure to an idea, and a thought is imparted.

How lines are utilized got a chapter, with some perceptive thoughts on how lines can convey feelings and moods. I thought his comment about how Rob Liefeld’s “hostile and jagged” lines expressed the anxieties of those growing up in the 90’s quite accurately. And it’s true! Image Comics broke away from Marvel at the time when Gen X was at it’s most angsty, and these artists had a new style of drawing that obviously met a need.

While most of this graphic novel was in black and white, a chapter on color used it sparingly to make several points. Color can be used to set a mood, establish a scene and add depth. Adding color can expand the reader’s experience and artists continue to experiment with different palettes to establish atmosphere.

I also appreciated how McCloud moved beyond the parts that make up a cartoon- he also looked at the big idea. Art has meaning and he ties it into resemblance and the picture plane. There are so many ways to impart representation in styles such as surrealism, expressionism, cubism and impressionism. Words and pictures have great power when harnessed together and artists have freedom in how to create their works of art, which includes cartooning.

To make an Infinity Gauntlet comparison, cartoonists will use space, line, color, closure, words and icons in helping them get their message across. These “gems” are the building blocks of effective illustration.

Reading this book took me quite awhile, as it’s information heavy narrative could overwhelm me at times. But I stuck with it and the knowledge that I picked up has made me look at comics with new appreciation. Already a fan of cartoons and graphic novels, McCloud’s astute analysis and deconstruction of this art form further elevated the genre for me.